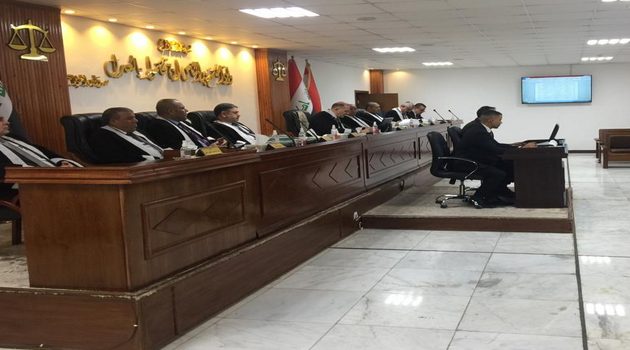 The full judgement, in Arabic, can be downloaded here, with Arabic summaries here, here and here.

A summary of the judgement in English, from the Court website, is shown below:

Federal Supreme Court Rules Invalidity of Paragraphs (2) and (3) of Cabinet Decision No. (109) of 2020 and the Decision (211) of 2021 and its repeal are related to the completion of the steps of establishing the National Oil Company and the assignment of [the Minister of Oil (Ihsan Abdul-Jabbar) to head it.]

The Court shall consider:

1-    Whereas, public funds have inviolability following all the divine laws and affirmed that the Holy Quran in a number of its noble verses and Article (27 / 1st) of the Constitution stipulates that this and that their protection is the duty of every citizen, so all institutions and employees therein must maintain the sanctity of those funds and that the initiation of a lawsuit to protect them is consistent with what is stated in Article (20 / 1st) of the Bylaw of the Court, which obliges that the interest is a state, direct and influential in the legal status or Financial or social and because it is in the interest of the people to pay the damage caused to public funds and this is considered to be in their interest.

2-    To annul the number of essential articles of the National Oil Company Law No. (4) of 2018 cannot proceed with the formation of the company.

3-    The statement that articles of other laws should be replaced by articles that have been declared unconstitutional is contrary to the binding and consistent nature of the decisions of the Federal Supreme Court, and must take into account the will and competence of the legislator to legislate other articles to replace the articles that have been declared unconstitutional, and to say otherwise means that the legislative authority is deprived of a part of its constitutional competences.

Also, the Court shall consider:

1-    The failure to find ways to preserve public funds, which belong to all the people, by the bodies legally mandated to do so is a violation of the provisions of Article (27/1st) of the Constitution, and failure to achieve this leads to the absence of social justice and the absence of national belonging to the State.

2-    The failure to maintain public funds leads to the failure of the State to carry out its constitutional duties following the provisions of Articles (29-36) of the Constitution.

It also shall consider:

1-    The Constitution of the Republic of Iraq of 2005 is the result of the will of the people following the provisions of Article (144), which stipulates that (This Constitution shall come into force after the approval of the people thereon in a general referendum) and the constitution was not drafted for the benefit of any political party, sect or nationality, but was drafted for all Iraqis without discrimination.