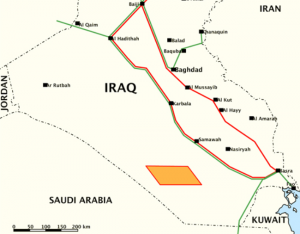 Location: The block lies within the southwest part of the Western Desert and covers an area of around 8,000 km2.

The Block is located in the Najaf and Muthanna provinces, approximately 80 km southwest of Samnawa city and about 130 km west of Nasriya.

The block is in the underexplored Salman tectonic zone.

The well drilled on this block indicated oil shows/stains from Kifl and Nahr Umr Formations.

On 14th December 2015, Premier Oil signed an agreement with Bashneft assigning its participating interest share in Block 12 back to Bashneft, the current operator; on 9th March 2017 Premier announced that it had successfully exited its position in Iraq.

In late 2016 Bashneft was acquired by Rosneft.

Contract duration: 25 years, may be renewed for an additional five years.

Remuneration: $9.85 per barrel of oil