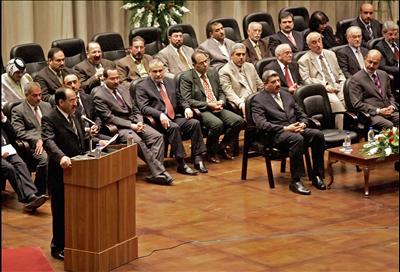 The Iraqi economy is familiar with Five Year Plans. In the 1970s, such plans contributed to industrial, agricultural, housing growth and to the overall economic boom. The Ministry of Planning’s new Five Year Plan for 2010-4, which was ratified this month, has prompted economists to voice concern over the balance in the plan between the private and public sectors.

While the plan, which took two years to formulate and is the work of ten specialized committees, focuses on achieving ‘sustainable development’ in Iraq, there is fear that greater economic power will be vested in the central government at a time when Iraq is looking to decentralize and build a strong private sector.

The plan aims to increase GDP by 9.38 percent and to diversify Iraq’s oil-dependent economy. It also calls for a 46 percent share of the economy resting with the private sector and for a strengthening of the decentralization process.

Ragheb Ridha, President of the Iraqi Businessmen Union, sees the promises for a strengthened private sector as mere propaganda. The Five Year Plan may call for almost half the economy to be private but the Iraqi constitution itself also stipulates this and Ridha believes no tangible steps have been taken.

"Iraq might return back to the central system of planning and managing the Iraqi economy," he said. "There are no guarantees whatsoever that such thing would not happen and real guarantees need to be in place."

Under Saddam Hussein, Five Year Plans wrested the economy from the grip of the private sector and put it in the hands of the government. In the early 1970s, 75 percent of the Iraqi economy was private, dropping to 20 percent in the 80s and dipping as low as 13 percent in 2000. That year, the highest contribution to the private sector came from agriculture.

“All these issues should have been specified and details and mechanisms should have been put in place. It is important that the state respects the transformation process into the market economy. It is a process that has proven its efficiency all over the world.”

The views of people like Ridha have done little to dampen the optimism of those who drafted the new plan but Ridha is not the only one who believes the plan is not based on solid grounds. Many cannot see how the plan can be implemented, given the dearth of basic services in the country.

“The main issue to be addressed now is that of electricity supply. Another very important one is the development of the Iraqi infrastructure," said Majid al-Souri, an Iraqi economist.

"If the state is really sincere about solving the economic problems of the country, it should have addressed these two major problems because no development until badly needed preparations is made in these areas. Despite good access to information on the problems, the government has failed in taking real steps towards a solution.

Munaf al Saegh, from the Institute of Economic Reform is also critical of the new plan.

“The Five Year Plan did not clearly address the issue of transformation to the market economy and the activation of the private sector role in Iraq. There are bits and pieces of ideas here and there but there is no detailed vision on how to achieve the aims," he said, warning:

"If the coming four years do not witness a participation of the private sector and the building of its capacities, we will fall into the same trap and there will be increased dependency on the state, thus the private sector will be marginalized again."
Iraq’s adoption of a market economy since 2003 has been chaotic at best. When the market there opened, goods from all over the world began to be dumped in the country. That the private sector’s share of the economy has reached 30 percent is due mainly to growth in commerce. No means were specified in the constitutional promise that Iraq would become market-oriented.

“Legislation still reflects the old central system and the routine is widely spread among government departments,” states al-Saegh. “It is not possible to transform the economy overnight but Iraq is yet to institutionalize a modern management basis in line with the needs of the modern era.”

Amir al-Baldaw, an MP and member of the economic committee, responded to the criticism, claiming that the plan does indeed consider carefully the role of the private sector.

“Private companies will partner the government in construction projects. There is also a role for civil society organizations,” she said, specifying that these would be “housing projects, projects related to the development of provinces and regions, and tourism and recreational projects."

She claimed that it was particularly in the housing field that the plan has focused on individual empowerment, adding that, unlike in previous Five Year Plans, this one will retain a focus on “care for marginalized and vulnerable groups, poverty alleviation, the achievement of the Millennium Development Goals, institutional reform and good governance."

While specific details of how the aims will be achieved remained sketchy, she also pointed to government expectations that between 3 and 4.5 million new jobs will be created as a direct result of the plan’s implementation. At the same time, she urged the private sector to “initiate activities without waiting for the government,” claiming there is "no need to wait for the state to give the private sector work to do. The private sector should also be creative in order to achieve real partnership," she explained.

However, al-Saegh believes this is not possible.

"The private sector cannot take the initiative without being supported. We need improved legislation and the activation of a private banking system, so that the private sector can benefit from loans,” he said. “All these points are missing in the new Five Year Plan.”