By admin on 15th June 2010 in Security, Weekly Security Update

On 13 June roughly eight attackers raided Baghdad’s Central Bank of Iraq, after an initial bomb blast caused by five suicide bombers, a three hour gun battle ensued as the  Iraqi Security Forces tried to gain control of the situation.  Open source reporting has set the casualties from this incident at a figure between 21 and 26 with around 72, mostly civilian, injuries.  On 25 May there was a similar raid carried out on a Baghdad goldsmith, seeing fourteen civilian deaths; three civilians were killed in an attack on a gold market in southern Basra on 9 June.

This series of robberies alludes to an emerging national trend for criminal activity which analysts have suggested is a sign that insurgent groupings are seeking alternative funding, in the event of a lack of external funding.  The perceived lack of financial support could be the result of effective Iraqi Security Forces reinforcement of the borders with Syria and Iran, both previously porous to smuggling.  The gains made by the joint operations of the Iraqi Security Forces and United States Forces Iraq’s against Al-Qaeda and other armed opposition groups through the capture or killing of key leaders are thought to have presented an additional strain on resources.  Iraqi Security Forces security operations have been increasingly successful in recovering weapons caches across Iraq, reducing insurgent reserves.

Iraq’s military and police have rushed to secure banks and goldsmiths across the country fearing further attacks of this kind as their efficacy is called into question.  At the same time Iraqis are questioning the ability of their parliamentarians, as grassroots issues such as electricity supply are persistently neglected.

Iraq’s new parliament convened on 14 June though the meeting was largely a matter of protocol with no significant progress made towards forming the next government.  On 10 June the two Shiite blocs announced their official alliance under the title of “the National Alliance.”  This move has marginalised the Sunni backed Iraqiya and Allawi has sought to counter this by reiteratin

g their right to form the next government, as top Sunni leaders within the movement urge him to concentrate on scoring key posts alongside the Shiite alliance.

Negotiations have been hampered by inter-alliance wrangling as Maliki and Allawi stake their claim for the premiership, with Maliki emphasising the country’s dependence on a strong experienced ruler.  The Sadr Movement have also put forward their candidate the vice president Adel Abdul-Mahdi as they have made it clear that they will not support a continuation of Maliki’s reign as he has been, “ungrateful towards the Sadrist blocs”.  The struggle to find a suitable leader that satisfies the extensive criteria of all participants is likely to be protracted, extending the difficult period of political uncertainty.  Abdul Mahdi deplored the situation, stating, “There is no real progress up to now, nothing real... we are still at a standstill.”

Allawi and Maliki finally met for a 90 minute discussion in what was described as an “ice breaker” meeting on 12 June.  The two leaders have agreed on the importance of a unity government, but Allawi’s commentary has become increasingly critical of Maliki, describing his post-electoral strategy as power seeking and elitist.  As the battle of wills rages on, Iraq’s citizens have expressed resentment that their elected officials are not meeting the country’s needs.  Insurgent groups will continue to exploit this lack of faith and gap in authority by launching attacks on civilians and officials.  For neighbouring Iran Iraq’s current status offers an opportunity to strengthen their negotiating position with the U.S. as it seek to withdraw its troops this summer.

The audacious attack on Iraq’s central bank signalled a decline in security in Baghdad this week and challenged the authority of Iraq’s Security Forces.  This incident also served as a reminder of the potential for large scale attacks in the city. 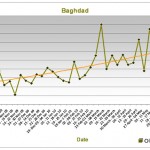 Walid Mahdi, an Al-Qaeda-Iraq cell leader infamous for planning Indirect Fire attacks against United States Forces Iraq’s installations is believed to have relocated near Camp Taji.  Walid's historic, and well known, tactics is to fire two mortars in succession and then egress again with the pick up truck that he fired it from. Historically these attacks were on Tuesdays and Thursdays between the hours of 04h00 and 05h00, as well as 20h00 to 21h00. Recent cache discoveries and arrests made by United States Forces Iraq’s forces and Iraqi Army suggest that he intends to carry out these activities in the vicinity of Camp Taji. The threat level on the Forward Operating Base has been raised to Very High for Indirect Fire at this time.

There were no attacks reported against Private Security Details and Route Irish, the International Zone and Baghdad airport did not witness any incidents.

Criminal activity was evident in Basra City as on 9 June six gunmen stormed into three gold jewellery shops shortly before 8pm killing the owners and fleeing with a large amount of jewellery.  This kind of incident could become more commonplace as insurgents seek to acquire funds and to intimidate the local population. 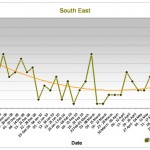