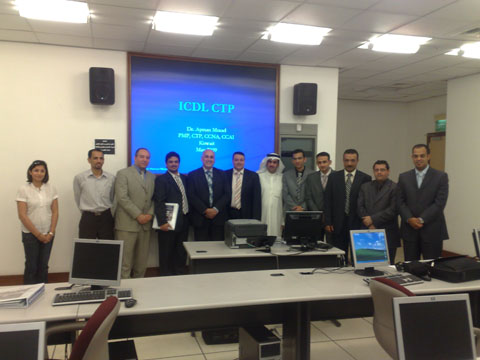 By Editor on 7th August 2010 in Employment, Iraq Education and Training News

ICDL GCC Foundation, the governing body and the certification authority of the International Computer Driving License program in GCC and Iraq, called on more participation from the private and semi-government businesses to support further digital awareness among all sectors of society through their Corporate Social Responsibility (CSR) programs.

Everyone is ultimately a stakeholder from a digitally literate society, as it will facilitate to consumers the reach to more products and services available online, and extends to governments and businesses increased online transactions at significant operational cost savings.

The Foundation is involved in many projects that reflect its mission of further developing a digital society; among these projects is the recently launched ICDL summer camp 2010 with the support of the governments, universities, and a few from the private sector.

This program has helped more than 10,000 youngsters from across the Gulf region to become IT skilled and it is considered an initial step to create a safe and efficient IT literate youth.

Corporate citizens and governments are equally accountable to their local communities. CSR benefits do not only fall into the community and the environment. There are also huge benefits to corporate citizens such as better financial performance, reduced operating costs, an enhanced image and reputation, increase in sales and customer loyalty, greater ability to attract and retain employees, as well as product safety and decreased liability.

It is important for corporate citizens to focus their CSR efforts towards their areas of expertise which they can genuinely add value and at the same time allow their business to reap the rewards in the long run. This is critical for the sustainability of any CSR effort as it will guarantee a long-term commitment that will allow the projects to come to fruition and really benefit the community they target.

Jamil Ezzo, Director General of the ICDL GCC Foundation, said: “The biggest challenge facing the implementation of CSR initiatives in the UAE and throughout the region is that most corporate citizens do not recognise the importance of their active participation in their local community. There is thus no real willingness to engage in a long-term strategic partnership with the government to promote IT awareness in society. On the other hand, governments should set incentives to encourage the private sector to engage in CSR and recognise the leading adopters of this field."

ICDL GCC Foundation intends to launch large-scale campaigns aimed at encouraging IT companies and telecommunications providers to reduce their service costs. The campaigns will be undertaken in response to the positive reception of nationals and expatriates to the e-services and advanced technologies being adopted by government departments and private establishments; including E-banking, E- booking, E- government, E- trade, E- learning, and online job hunting. Another initiative the foundation is pursuing in cooperation with the various parties including; local e-governments and other benefitting industries involves the "e-Citizen" Program, which is an initiative aimed at preparing the public on the use of online services in their daily activities. This initiative will target thousands of citizens from different social groups.