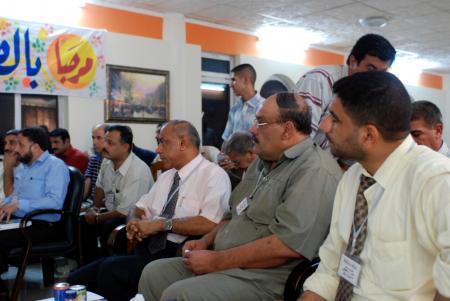 Educational centers teaching journalism and media studies in Iraq have increased dramatically since 2003, which observers find promising in the country's opening.

After the toppling of Saddam Hussein’s regime in 2003, under which independent journalism was strictly censored, many independent media centers opened in Iraq, the majority of which are based in Kurdistan Region due to the security situation of other parts of the country.

The centers oversee media courses which have been attracting a large number of journalists in recent years.

Some of the most prominent media centers include:

in addition to other local organizations linked to international bodies.

The representative of the IMCB, Kholud Ramzi, said, "These centers organize courses to teach the basics of the press and media and admit graduates of Iraqi universities from various parts of the country.” Last year, only graduates from a limited number of Iraqi provinces were admitted to the center.

The majority of the organizations give four to six sessions per year, according to official statistics of the Union of News Organizations in Iraq, involving dozens of Iraqi journalists.

Student Manaf Taleb, 25, told AKnews that he had participated in lengthy sessions of teaching journalism and media that are held in Kurdistan. At the completion of the courses Taleb said he realized what the press was and what its importance and accuracy meant.

"I got certificates that qualified me to work in the field of journalism and the media." Taleb said with joy.

Another trainee, Ayoub Hasan, 25, said he learned a lot from the journalism training and that he loves his career as a journalist.

"I am a graduate of the Faculty of Science - Department of Chemistry – but I entered the field of journalism, and participated in the course for eight months at the Institute of Journalism of the Independent Media Center in Kurdistan,” said Hasan.

“I felt it served me a lot in my professional career, I am ready to participate in other sessions that develop my abilities in journalism and media." said Hasan.