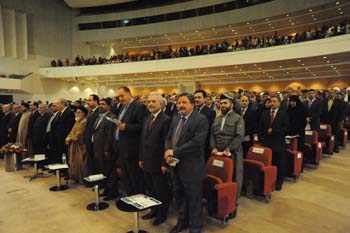 By DeWeaver on 24th November 2010 in Iraq Banking & Finance News, Mark DeWeaver on Investments and Finance

The formation of a new Iraqi government will undoubtedly be good for stock market sentiment, as such events generally are. And indeed the market has pretty obviously turned around already, with volumes increasing and the Rabee Securities index up about 6% since bottoming in early October.

But skeptics may still argue that investors have no real reason to celebrate. After all, aren’t these pretty much the same people that were in power before? Why should we expect the country to be any better governed or the business climate to improve?

There is, however, one thing the new government could do that would be both relatively easy and unambiguously positive for stocks: pass the new securities law. This legislation would be considerably less controversial than other matters the politicians might take up (e.g. the status of Kirkuk or the oil law) as there are really no ethnic or sectarian issues involved. And it would be an essential step towards realizing the full potential of the ISX to serve as a platform for Iraqi companies to raise capital and, perhaps longer term, for the privatization of state-owned enterprises.

Some of the most obviously positive features of the new law relate to the sale of new shares. For example, rather than having to issue everything at par (ID 1), as they do now, companies will be allowed to set whatever price they think the market will bear (Article 26:A), making rights issues much less dilutive. The law also provides a legal basis for underwriting (Article 17:C), which, particularly in the case of an IPO, would make it easier to determine what that market-clearing price might be. And presumably Article 70, Section A:1, which limits suspensions from trading to 10 days, will mean that investors will no longer have to wait for months to trade following capital increases.

Changes like these will help bring the ISX into conformity with international best practices and are in any case little more than common sense. Yet practically no progress seems to have been made on the new law since 2008, the date of the most recent draft on the Iraq Securities Commission’s website (available at: www.isc.gov.iq). Isn’t it finally time for this legislation to be enacted?