By admin on 25th November 2010 in Weekly Security Update

Last week was one of the quietest reported in Iraq since the 2003 invasion. Many people were observing the festival of ‘Eid ul-Adha and in all likelihood, militants and terrorists were also participating. As mentioned in last week’s update, religious events such as this are generally less inflammatory in Iraq, mainly because they are observed by both Sunnis and Shi’ahs. The Christian community on the other hand, was not observing the event and was subject to further attacks in Baghdad and Mosul. Security measures were heightened with checkpoint searches and police patrols increased around urban areas countrywide. Fifteen people were killed in attacks, which is generally low for the country. Since the weekend, however, there has been a resumption of militant activity, particularly in the central and Northern provinces. 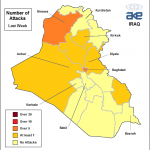 For a change, Mosul currently appears to be seeing more violence than Baghdad. An oil pipeline guard, a television anchorman and two Christian civilians were shot and killed in separate incidents in the city last week. Targeted killings against individuals based on their employment and community background may actually increase in the city and wider provinces of Ninawa and Ta’mim over the coming month. A census is planned for early December and this has traditionally prompted inter-communal violence, particularly in Kirkuk, when planned in the past. However, the survey has been delayed several times since the last full one was held in 1987 and the December census may also face a postponement.

The past two weeks have been particularly quiet in the central provinces. Even Baghdad saw virtually no incidents last week, although this is already starting to change now that ‘Eid ul-Adha has concluded. Parliamentary discussions have resumed which could prompt an increase in mortar attacks on the International/Green Zone. As ever, roadside bombings, targeted shootings and occasional mass-casualty terrorist attacks should all be anticipated, particularly in central Baghdad, as well as the districts immediately surrounding the capital.

The South was equally quiet last week with no major attacks recorded and only a scattering of police incidents, mainly arrests around Basrah. Security has been tightened in the city for a conference currently being held. Personnel should note that accommodation has become scarce. Site surveys of alternative places to stay should be considered in advance of booking travel to ensure that facilities are secure.

Good News For Foreign Investors in Iraq
Which Sectors are Most Targeted in Iraq?