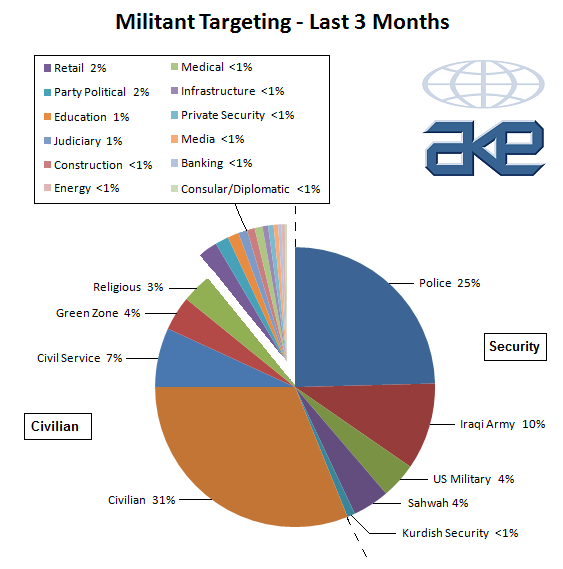 AKE has analysed all of the attacks reported in Iraq over the past three months. Commercial sectors such as retail and banking were actually targeted in only a small proportion of cases.

The overwhelming majority of victims were civilians targeted on an indiscriminate basis. The police were the second most targeted group while the security forces combined sustained around 40 per cent of all attacks. Conversely the energy sector was targeted in less than one per cent of all incidents. However, while this may be a small proportion in comparison to other sectors, the handful of attacks which did occur caused several fatalities. The low proportion should therefore not be taken as grounds for any complacency.

The main trend facing the energy sector is that Iraqi national employees are being monitored, targeted and murdered, usually with firearms. Infrastructure on the other hand, including pipelines, rigs and other assets have been attacked only on rare occasions over the past two years. Property protective measures are still hugely important, but energy firms, including state-owned entities, should emphasise personnel-orientated risk mitigating measures. Employee training and even close protection should be considered where suitable.

The majority of energy employees targeted in recent attacks have been singled out when driving to or from work. However, in some cases employees were also targeted and shot dead in criminal raids while they were delivering salaries to refinery employees. The nature of the attacks would suggest that they have been planned and that the attackers had prior knowledge of the victims’ movements.

A significant risk mitigating procedure would therefore be to reduce the number of people who are aware of the planned movements of staff members – particularly those delivering wages, who are a highly attractive target for criminal attack. Similarly employees, even those travelling to work on a day-to-day basis, are advised to vary their routes and routines. This makes it harder for potential threat groups to spot them and track their movements, thus making it very difficult to plan an attack.

AKE would also recommend that Iraqi national staff are discreet about their employment. There was a time in the country when knowledge of your involvement in a certain sector or with a foreign company could result in your kidnap or murder. With the security situation improving Iraqis appear gradually more willing to disclose their employment, but this should not be encouraged. The use of logos and corporate branding on vehicles and uniforms is also highly unwise, because it will instantly identify affiliation with a company, sector or foreign interest. These could all raise the likelihood of an attack, either opportunistic or planned. Indeed this guideline should be adopted by all sectors, certainly not just the energy sector.