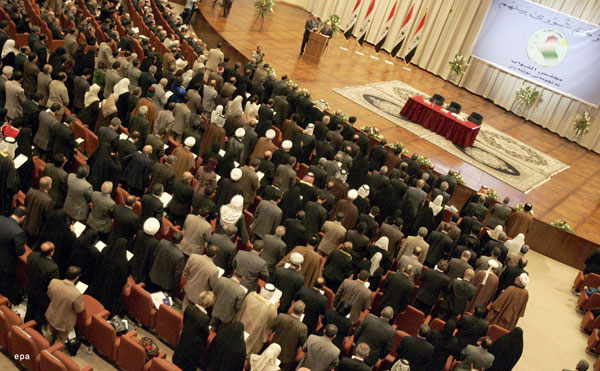 The following profiles of the top ministers ihttps://www.iraq-businessnews.com/wp-admin/post.php?post=14895&action=edit&message=10n the new Iraqi cabinet are based on information from Reuters and Associated Press:

Al-Maliki, 60, was first installed as prime minister as a compromise candidate in 2006 but barely hung onto the job this year when his political coalition fell short of winning the most seats in national elections. Born in 1950 in Hindiya, he holds a master's degree in Arabic and worked at the education ministry before fleeing Saddam Hussein's regime.

With his trademark grin and walrus mustache, Talabani, 77, has positioned himself as a father figure for Iraq. Despite holding a largely ceremonial post, he has flexed political muscle on some issues. He is viewed with suspicion by some Iraqis who believe the president should be an Arab.

Talabani was born near Arbil in northern Iraq in 1933 and became a lieutenant to Mullah Mustafa Barzani, patriarch of Iraqi Kurdish nationalism and founder of the Kurdistan Democratic Party. He split from the KDP in 1974 and formed his own party, the Patriotic Union of Kurdistan, in Damascus the following year. Talabani became Iraq's first elected president in more than 50 years in April 2005 and was selected again in April 2006 as a national unity government was put together.

Al-Nujaifi and his brother, Ninevah Gov. Atheel al-Nujaifi, are two of the most powerful Sunni Arabs in Iraq's north and have taken hardline positions against Kurdish power in Mosul. The 54-year-old speaker was born in Mosul and has a degree in electric engineering.

The contentious anti-Iran Sunni lawmaker was banned from running in 2010 elections because of alleged ties with Saddam Hussein's disbanded Baath party, but allowed this week to resume his political life under a government power-sharing agreement. He was born in Fallujah in 1947.

The current oil minister will oversee Iraq's lucrative energy industry in his new post. Al-Shahristani was imprisoned for years during Saddam Hussein's regime. He opposed oil deals signed by Kurdistan government. Born in 1942 in Karbala, and a nuclear scientist by training, he studied in Britain, Russia and Canada.

Articulate and accessible to reporters, Zebari, 64, has worked with American officials for years, going back to when he was the foreign spokesman for the Kurdistan Democratic Party. He speaks fluent English. He was born in the northern Kurdish town of Aqra, near Mosul.

The Shiite former prime minister's alliance won the most seats in the March election with strong Sunni support. Born in Baghdad in 1946, Allawi abandoned the Baath party in 1975 and escaped an assassination attempt by Saddam agents in 1978 while he was in London.

He is currently serving as a deputy prime minister. He was a fierce critic of U.S. troop activity during the first major battle of Fallujah in 2004 when he was serving as director of the city's hospital, claiming more than 600 people - half of them women and children - were killed in the fighting.

Born in the Iraqi capital in 1959, Luaibi graduated from the University of Baghdad with a bachelor's degree in oil engineering. He was hired by the government as an oil engineer with the South Oil Company in 1982.

Luaibi worked with the Midland Refinery Company, another Oil Ministry affiliate, from 1993 to 1999 and moved to the technical department of the ministry in 2006. He moved up the ranks quickly, to inspector general, from 2007-09, and then as deputy minister in March 2009.

Luaibi is known to have good relations with international oil companies. He led most of the talks in the first and second bid rounds for Iraq's oilfields and signed many of the contracts with global majors.

One Response to Who's Who in the New Iraqi Cabinet