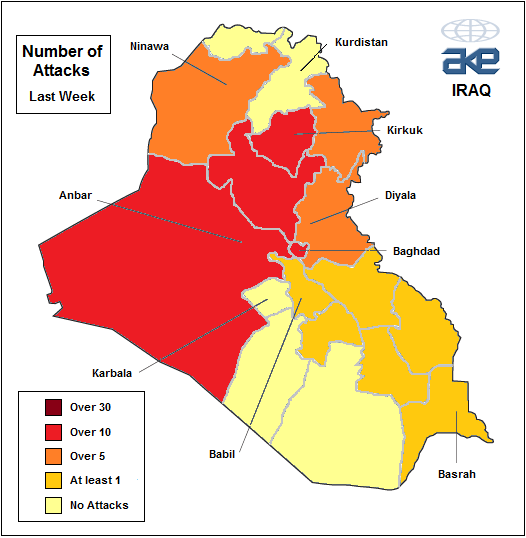 By JohnDrake on 3rd March 2011 in Weekly Security Update

Conditions continue to worsen in Iraq, with civil unrest gripping cities from Arbil in the north to Basrah in the south over the past week. As well as demonstrations in Kurdistan there has also been a lesser reported rise in ethnic tensions around the city of Kirkuk. The past week has also seen a spate of incidents running along a belt of towns from eastern Anbar province to western Diyala province in the centre of the country. The south has also seen a scattering of militant activity, comprising of bombings and rocket attacks, primarily targeting US military interests.

In the ethnically divided city of Kirkuk there has been a rise in clashes between armed Arab, Kurd and Turkmen residents over recent weeks. At present Arab and Turkmen sensitivities are being exacerbated by the presence of a significant Kurdish Peshmerga security force on the northern boundaries of the city. The Kurdish authorities state that the force is in the area to maintain stability but many non-Kurdish residents fear the force has ulterior motives as it patrols the outskirts of what many regard as a rightfully Kurdish city.

Discontent with unemployment, nepotism and a lack of political reform continues to prompt demonstrations in Kurdish cities in the north. The response from the authorities has been to deploy Peshmerga forces to restrict traffic and control crowds, occasional resorting to the use of violence to achieve this. However, political concessions will have to be made if the demonstrations continue and become more violent.

Finally, the Kurdistan Workers’ Party (PKK) released a statement on 28 February announcing it had called-off a six-month ceasefire, raising fears of renewed violence in the Qandil Mountains. However, if the coming weeks see a rise in clashes it is not likely to affect the majority of business interests in the region. Activity will likely remain concentrated around isolated parts of the border.

Like many parts of the country, the central provinces saw bouts of unrest over the past week, particularly on Friday. However, the majority of incidents did not involve fatalities, unlike the protests in the north and south of the country. Indeed the imposition of heightened security measures in Baghdad meant that overall violent activity was particularly low in the city. 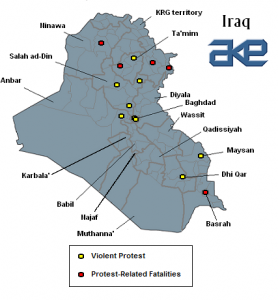 Unrest aside, however, the central region was blighted with a number of more bloody terrorist attacks over the course of the week. A series of suicide bombings left numerous people dead, with the police suffering the majority of attacks. Several shootings also targeted individuals deemed to be pro-state and anti-radical, such as Sahwah members and at least one mosque imam. In the end, it was the bloodiest week in the central province since Ramadan in 2010.

Even the more quiet south of Iraq saw its share of violent protests last week, with a fatality reported at a rally in Baghdad and numerous injuries in Amarah (Maysan province) and Nassiriyah (Dhi Qar province). Three bomb blasts were also reported around Basrah city, with armour-piercing devices used on at least one occasion. The majority of targets were US military convoys, although private security vehicles – and by default the clients they escort – are also at potential risk, particularly if they travel high profile. Blending in with the use of low visibility vehicles may be a more preferable option in the region.