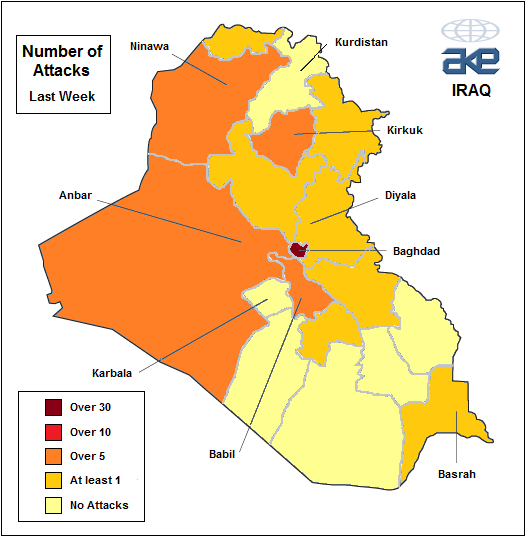 By JohnDrake on 26th March 2011 in Weekly Security Update

Levels of violence crept up once again in Iraq last week. What is of concern is that this violence was attributed almost entirely to terrorists and militants, whereas recent weeks saw an increase in violence related to civil unrest. Protests subsided (to a degree) last week but more hostile elements, capable of inflicting far greater casualties, returned to the fore, conducting attacks in Mosul, Kirkuk, Baghdad and districts surrounding the capital in particular.

That is not to say the week was not without violent protest. At least one violent demonstration occurred in Halabjah, in the Kurdish province of Sulaymaniyah. Overall the region remains safe for the vast majority of foreign personnel who travel there to work. However, the ongoing protests should be borne in mind as a concern nonetheless because they will likely continue to turn violent, leading to injuries, deaths, possible vandalism against private property as well as travel restrictions in the event that routes are closed and curfews are imposed by the authorities.

Elsewhere in the north violence remains concentrated in Mosul, although Kirkuk has seen a rise in violence over recent weeks as well. The Turkish military has also resumed its bombing of Kurdish terrorist outposts in the Qandil Mountains. This tends not to affect the majority of personnel in built up parts of the region, but it could lead to civilian casualties and damage to agricultural property over the course of the coming months.

Last week saw a rise in violence in Baghdad. Targeted killings appear to be on the increase once again, with senior members of the security forces and mid-level civic employees most likely to be singled out. Militants have been using roadside bombs, sticky bombs, and guns with silencers to carry out their work. Otherwise violent activity in the region has been concentrated in Fallujah district in Anbar province, as well as in western Diyala province.

Conditions in the south of the country remain comparatively quiet, although the US military continues to suffer roadside bombings against its high profile convoys, and rocket and mortar attacks against its fortified facilities. Personnel travelling low profile will be less at risk, while those staying in otherwise well-defended bases should bear in mind that they may have to take cover at short notice in the event of any further indirect fire.