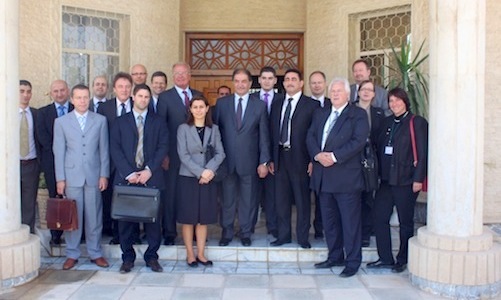 A business delegation from Bavaria spent a few days looking around Erbil and was very impressed with what they saw: from the security situation to the trade fair locations. Last but not least, they also enjoyed German draft beer in the Middle East, fresh from the tap.

Iraq and the state of Iraqi Kurdistan need German business and investment – this was made clear, time and time again, to the 12 members of the economic delegation from Bavaria. Representatives from the telecommunications, high tech and logistics industries as well as architectural and city planning sectors were in Erbil on the fact finding mission.

The mission had been organised by the German-Arab Friendship Association (DAFG) and the Bavarian Business Association in co-operation with the German Trade Office in Iraq (DWI).

For most of the participants it was their first trip to Iraqi Kurdistan. Their aims were to form their own individual impressions of the country, to make contacts or to prepare for cooperative ventures. The packed programme of activities and meetings helped them achieve all of this.

They were able to speak to high ranking politicians - including the Minister for Trade and Industry Sinan Abdulkhalq Ahmed Chalabi, the Minister for Planning Ali Osman Haji Sindi, the President of Chamber of Commerce Soran A. Aziz, the Governor of Erbil Nawzad Hadi and the Minister for Foreign Affairs Falah Mustafa Bakir.

All of the politicians reiterated that almost every business sector had a pressing need for German investment, German service providers and German businesses. The transfer of knowledge and information was a prerequisite for sustainable economic relationships.

Additionally they also emphasised that Iraqi Kurdistan could well make a suitable base for any businesses wishing to work further afield, from the south of Iraq to Iran, Syria and even Turkey.

The security situation in the north was better than many other areas in the Middle East, they said, and pointed out that this was also the reason that many Iraqi businesses were transferring their headquarters to the north. Additionally the state had barely been affected by the financial crisis and had the potential for extremely good economic growth in the near future.

At an evening event organised by the German Trade Office in Iraq (DWI) and held at the European Technology and Training Centre (ETTC), the participants were then able to talk over their impressions of the place, as they wined and dined and were treated to German beer. They were also able to discuss German-Iraqi business relations with members of the German Bundestag, Wolfgang Tiefensee and Uta Zapf of the Social Democrats, who were also in attendance.

Voices from the delegation:

“As a company with 30 years of experience, we can certainly contribute to some of the larger projects being undertaken in Iraq and in the federal state of Iraqi Kurdistan. This mission has helped with that, in making suitable contacts and discussing potential co-operative ventures. In terms of what Kurdistan had to offer, I was happy to simply let myself be surprised – and I’ve been very impressed. I can say with certainty that I will return to Erbil again, in order to take these discussions to the next level.”