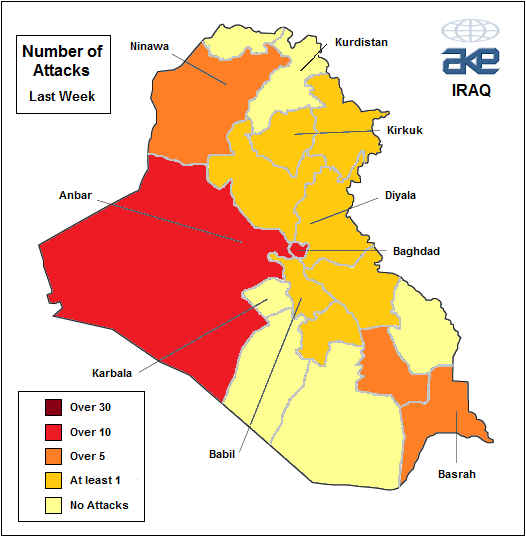 By JohnDrake on 9th June 2011 in Weekly Security Update

Levels of violence rose in Iraq last week, although conditions were not as bad as a fortnight ago. Most incidents were concentrated in Baghdad, Anbar and Salah ad-Din provinces, with an overall decline in militant activity in the north of the country and a rise in attacks in the south. There has also been a rise in attacks against the US military, with grenades, indirect fire and roadside bombs being used to target armoured convoys and fortified facilities. It is likely that militants are attempting to pressure Washington ahead of the planned withdrawal of US forces due by the end of the year.

The cities of Mosul and Kirkuk have generally been the most hostile parts of Iraq after Baghdad over the last year, accounting for around 13 per cent of all violent incidents each over the last two months. However, last week was the quietest week in the two cities since early February. Militant activity was relatively low, potentially in response to a number of police and military operations which took place in the area. The trend is likely to be temporary.

The centre of the country has been more violent than normal over the past two weeks. Ramadi and Tikrit were struck by suicide bombers, which left dozens of people dead and injured, particularly amongst the police and army. Baghdad continues to see the greatest number of terrorist attacks, but most of the bombs being used are relatively small. The city also offers a number of safety advantages not offered in other parts of the country. Further analysis on these are available here. Otherwise Anbar province is currently the most hostile part of the central region, with most incidents taking place in the more urbanised east, around Fallujah, Ramadi and the outskirts of Baghdad.

The southern provinces saw a notable rise in militant activity last week, primarily around Basrah and Diwaniyah. Four explosive devices targeted an oil storage tank at the Zubair field on 5 June. According to open sources and official statements two of the devices were made safe by the authorities but the other two detonated. No casualties were reported but the attack, which some have already described as an inside job, is likely to shake confidence in the safety levels involved in working in the sector. The US military and Basrah Operations Command centre were also attacked on several occasions, with roadside bombs, grenades and indirect fire (rockets and mortars). Two women were also kidnapped in Qadissiyah province, with one found dead shortly after. In the first quarter of 2011 AKE recorded an average of 8-9 Iraqi nationals abducted every month. Further details are contained in our latest Kidnap and Ransom report. For further details please email [email protected]