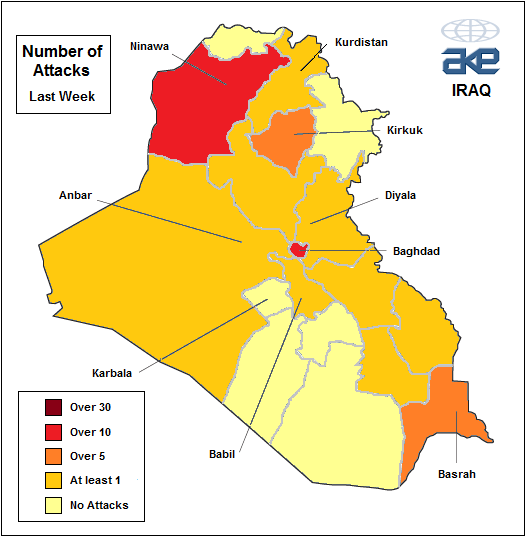 By JohnDrake on 23rd June 2011 in Weekly Security Update

Overall, levels of violence fell in Iraq over the past week, but the rate of weekly incidents has continued to fluctuate in recent months and the improvement is likely to be temporary. There have been three recent suicide attacks, targeting provincial government buildings and the police. Two of these attacks have taken place in the predominantly Shi’ah south of the country, where suicide attacks are rare. Evidently radical groups are diverting their resources to make specific attacks on the oil rich region. They may be attempting to deter foreign investors, harm government revenues, enflame sectarian tensions or a combination of all three. Either way, personnel and organisations are advised to review security measures around their facilities, accommodation and places of work.

On the edge of Arbil province a number of Iranian troops were killed and injured by landmines on the Iran-Iraq border on 16 June. The incident highlights the ongoing risk posed by unexploded ordnance in the area although it does not pose a major concern for the majority of businesses in Kurdistan, particularly in built-up areas. Otherwise, last week saw a fall in violence in the adjacent cities of Mosul and Kirkuk, although conditions are still hazardous in the two cities.

There was a decline in militant activity in the central provinces last week. The police increased their levels of vigilance in many areas after a suicide attack on a provincial government compound in Ba’qubah (as covered in last week’s security update). The authorities are also preparing for possible attacks against civilians over the coming days. On 26 June (25 Rajab) Shi’ahs will commemorate the death of Imam Kadhim with gatherings at mosques and visits to the Baghdad district of Kadhimiyah. On 28 June (27 Rajab) Shi’ahs and non-radical Sunnis will also commemorate Laylat al-Miraj, the day when Muhammad ascended to heaven. Religious gatherings for both events may be targeted by opportunist terrorists and AKE has raised the risk rating for the country on Global IntAKE as a result. However, while many may be concerned about the risk of bombings in Baghdad, it is shootings which are currently resulting in the higher number of fatalities. Targeted attacks by militants using silenced weapons are leaving many more people dead than bombings are. Mid-level civic employees and members of the security forces – as well as their families – are most at risk of being singled out, although convoys transporting foreign nationals have been targeted twice in the capital over the past week so all personnel are reminded that there are no grounds for complacency.

The south of Iraq has seen a slight rise in militant activity over recent weeks. There have been two co-ordinated suicide attacks in the region, including one recently covered in Iraq Business News in Basrah. This type of tactic is very rare in the region, not least because the Sunni groups normally responsible have a very limited presence in the area. It is likely that groups such as the Islamic State of Iraq are diverting specific efforts to conduct attacks against the authorities in the south for several reasons. Firstly, security measures are described as more ‘relaxed’ in the region, which evidently presents an opportunity for terrorists. Attacks on the oil rich area and emerging market are also likely to deter foreign investors. This will harm both government economic plans, as well as the western firms so opposed by violent jihadist organisations. The attacks may also cause the Iraqi public to question the capabilities of the government. They may even harm sectarian relations in the country. AKE recommends that organisations in the south review the security measures around their premises to ensure that any vulnerabilities to planned and complex terrorist attacks are minimised. For further information please email [email protected].