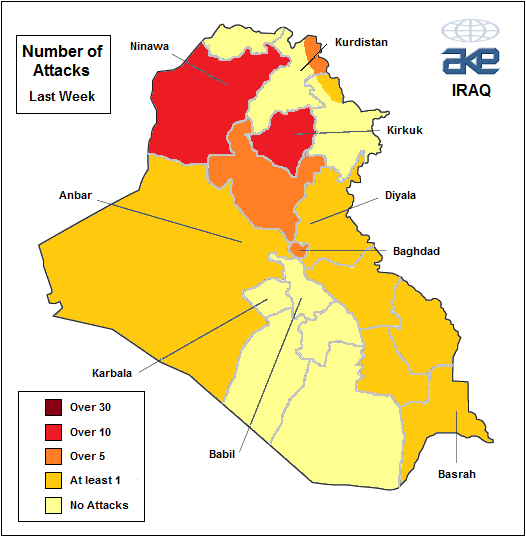 By JohnDrake on 3rd August 2011 in Weekly Security Update

Levels of violence rose slightly in Iraq over the past week although conditions remain quieter than much of the year so far. Fewer than 50 people were killed, which is a moderate figure by Iraqi standards, albeit still abhorrently high. A notable number of the dead and injured were caught up in a double suicide bombing in the central town of Tikrit. Baghdad was quieter than normal, whereas Kurdistan has seen a rise in attacks taking place along the isolated border with Iran. Security measures have been increased along the border with Syria amid a rise in instability in Iraq’s neighbour. Tensions have also been stoked with Kuwait, making it a generally poor week for Iraq’s border regions.

Iranian forces have been attempting to combat Kurdish separatist terrorists in the mountains of Arbil province, but fighting may now cease – or at least reduce significantly – as the holy month of Ramadan has begun. Even if fighting continues, however, Kurdistan remains stable and activity is not likely to affect the majority of residents, business interests and foreign travellers in the region. The country map above indicates that the level of risk is highly concentrated and not affecting most of the region. Mosul remains as hostile as ever, and last week it saw more violent incidents than the capital. The province of Ta’mim also remains hazardous, and two individuals were abducted in separate incidents in Kirkuk last week. The city is becoming one of the biggest kidnap for ransom hotspots in the country. For the latest edition of AKE’s quarterly kidnap brief please email [email protected].

On 28 July a suicide bomber targeted a group of Iraqi security force personnel in Tikrit. A second suicide bomber targeted first responders on the scene shortly afterwards. At least 15 people were killed and 38 injured in the attack and a curfew was imposed on the town. In general, the central region saw a rise in overall violent activity last week, although the majority of incidents tend to take place in towns situated close to Baghdad. The capital itself has been much quieter than normal over the last two weeks, although the authorities have warned that militants may simply be consolidating their resources and preparing for another surge of violence, potentially once Ramadan has concluded at the end of August.

The south of the country remained relatively quiet last week, although there have been a series of recent military raids involving US troops in the region. While they are likely to be initiated with credible intelligence on the whereabouts of suspected militants, they are nonetheless stoking animosity amongst southern residents, many of whom may be more willing to protest against the continued presence of Washington troops in the country.