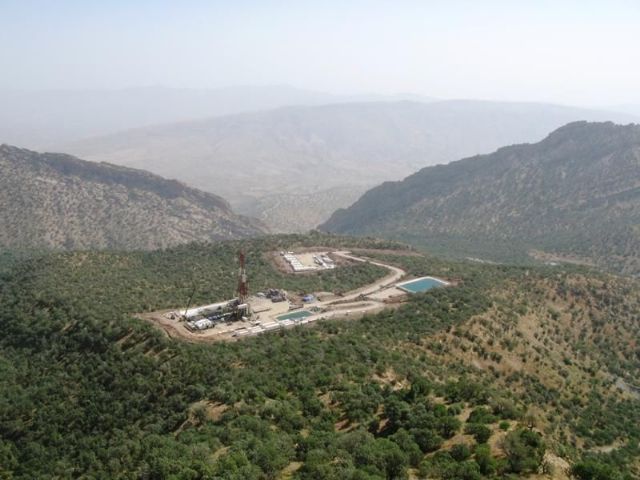 Groundstar Resources has announces that the consortium has concluded operations at the Qara Dagh -1 exploration well; the company's shares closed down 28% on Friday.

The well has been drilled to a total depth of 4,196 meters, the maximum depth possible with current casing and drilling equipment, ending in the basal section of the Upper Cretaceous Shiranish Formation. Interpretation of open hole image logs have positioned the well on the North East structural flank of the Qara Dagh anticline, approximately 400 meters east of the anticlinal core.

Oil shows have been encountered over a gross column of approximately 955 meters and open hole drill stem tests were conducted in the Shiranish Formation with cased hole tests completed in the overlying Upper Cretaceous Tanjero Formation. All zones after acid stimulation successfully tested light sweet gravity oil (ranging from 43 to 46 API @ 60°F) but at non-commercial flow rates. Reservoir permeability and encountering low fracture densities are the principal causes for poor flow rates.

The operator has completed testing operations and is in the process of removing the testing equipment. The Qara Dagh well will be left in a condition such that the partners have the option to re-enter the well at a future date. Various re-entry scenarios, including extending the well's total depth or drilling a deviated side-track well, are being considered. Furthermore Niko, the operator is currently scouting potential locations at the north end of the Qara Dagh anticline for a second well expected to spud in 2012. The next well is expected to target the main Kometan and Qamchuga formations in the Cretaceous. The Qara Dagh block contains a large surface anticline with several major prospective horizons.

The Qara Dagh Block is located in the prolific Zagros foldbelt that extends from southern Turkey across northern Iraq and into southwest Iran, and which contains giant and supergiant accumulations of hydrocarbons. The large surface structure on the block known as Qara Dagh is a prominent anticline that rises as high as 600 meters above adjacent valley floors. This block, which is 65 kilometers by 5 kilometers, is located 60 kilometers southeast of the Taq Taq oilfield and 60 kilometers east of the giant Kirkuk oilfield, and is adjacent to Heritage and Western Zagros blocks with recent oil discoveries. Groundstar has a 6% beneficial interest in the Qara Dagh Block.