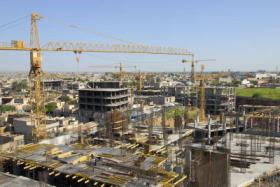 The Iraqi cabinet has approved the establishment of five industrial cities in various Iraqi provinces, with the intention of strengthening local industry and reducing the need for imports.

''The government has agreed to the proposal in view of its vital importance for Iraq, from an industrial point of view, as well as the saving of hard currency and the creation of job opportunities."

The government has asked the Ministry of Planning to draft the final layout of the industrial cities, determine their cost and submit a list of companies best able to build them.

About $1.2 billion [1.4 trillion Iraqi dinars] will be allocated for the construction of the cities in Baghdad, Basra, Ninawa, Najaf and Babil.

Mohammad Obais, an adviser to the Ministry of Industry, said:

"The cities will have different areas, but none less than 500 dunams, and will include various factories and production lines, such as plants for iron, steel, concrete, aluminum and plastics, in addition to factories for electrical items, copper and bricks".

Obais said there is only enough money in the state budget for five cities in the coming years, "but we have the ambition in the long term to build other cities in each province".

Hisham Ahmed al-Adly, of the Ministry of Industry, said "agreements will be reached with well known foreign companies with solid reputations to start work early next year".