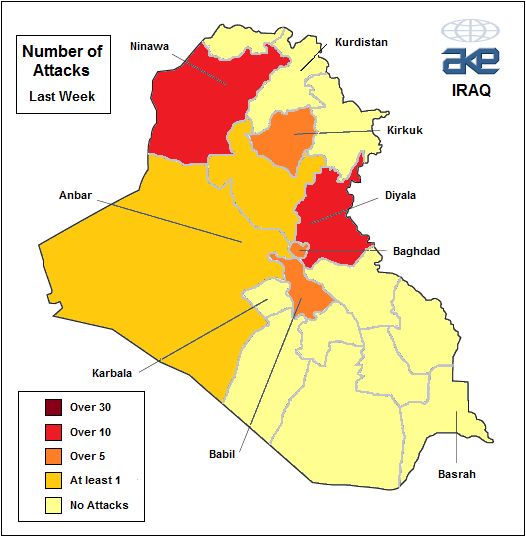 By JohnDrake on 26th January 2012 in Weekly Security Update

Conditions continue to fluctuate in Iraq. Levels of violence rose slightly last week, but in the absence of any major mass casualty attacks the overall number of fatalities fell from the previous week. At least 47 people were killed and 71 injured in nationwide incidents. Countrywide, a total of 25 bomb attacks left 16 people dead and 40 injured. An additional suicide bombing in Babil province left three people dead and 18 injured. A notable rise in the number of small arms attacks left 28 people dead and 13 injured. Two Iraqi nationals were abducted in Ta’mim province while the body of a British national, abducted in 2007, was finally handed over to the authorities. The central provinces experienced the lion’s share of violence. Iraqi Kurdistan saw no major incidents of violence at all,

North
The cities of Kirkuk and Mosul remain very hazardous, with almost daily attacks in both. The police and military remain the most common target of militant attacks in the non-Kurdish governed north of the country although civilians are also regularly being singled out because of their community backgrounds. Members of the Shabak community were hit by a bombing against an IDP camp in Bartala, near Mosul last week, for example. 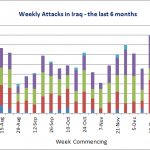 Centre
Militant and terrorist activity was concentrated in the centre of the country – particularly Diyala province around Ba’qubah. Baghdad also saw several attacks although the capital is currently quieter than normal. Indirect fire attacks (rockets and mortars) in the city left no casualties and only limited damage last week. Nonetheless, one of the attacks targeted the Turkish embassy, signalling a warning for nationals of the country that they are as much at risk of being singled out for attacks as other foreigners. For some time, Turkish nationals have been able to ‘slip under the radar’ in Iraq, blending in and travelling low profile. Nonetheless, Turkish nationals were amongst those abducted in the country last year and with worsening relations between Baghdad and Ankara Turkish organisations should perhaps consider reviewing their security measures in place at present. Low-profile measures will probably suit the majority of Turkish firms and nationals for now. Blending in should still be regarded as the best means of mitigating risk. Nonetheless, at least some protection should be regarded as better than nothing.

South
No major incidents were reported in the south of the country last week although unknown blasts were reported in Basrah on 25 January. Under-reporting remains a concern in the region and while it is certainly far quieter than the centre and north of Iraq it should not be regarded as ‘safe’.