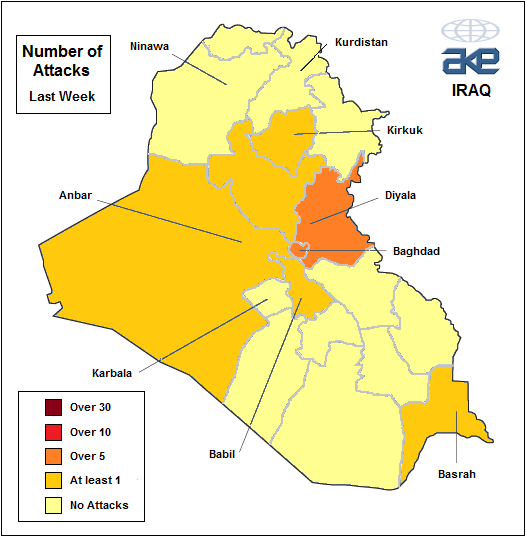 By JohnDrake on 15th February 2012 in Weekly Security Update

Levels of violence fell in Iraq last week. At least 19 people were killed and 55 injured in nationwide incidents. This is a relatively low figure for the country. There was a decline in bombings and shootings countrywide. There were no suicide bombings or abductions reported, although a woman was rescued from captivity during a police raid in the south of the country.

North
The north of the country has been unusually quiet, with no major incidents recorded in Mosul city last week. Cross-border Turkish military operations have increased along the border. Ankara is in pursuit of PKK terrorists based in the isolated mountains in Kurdistan and fighting generally starts to increase as winter conditions ease. Further clashes should be expected over the coming weeks, although built-up areas will remain largely unaffected. 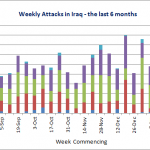 Centre
Last week’s violence was concentrated in the central provinces and Baghdad. Open sources currently indicate that al-Qaeda is planning to expand its presence in Iraq from its last major bastion in Mosul in the north, towards its former heartland in the central provinces. The provinces of Anbar, Salah ad-Din and Diyala in particular may see a rise in radical Islamist violence over the coming months as a result. The Iraqi security forces and Sahwah movement will be the most likely target of attacks in the shorter term.

South
The south of the country remains relatively quiet, although the police continue to arrest numerous suspected terrorists and criminals. During one such operation a kidnapped woman was rescued in Basrah, highlighting the fact that even in more stable parts of the country security threats persist.