By JohnDrake on 15th March 2012 in Weekly Security Update

Levels of violence rose in Iraq last week. At least 70 people were killed and 76 injured in nationwide incidents, although this figure does not include the ‘emo’ and LGBT fatalities widely reported in open sources within Iraq over the past two weeks. A significant rise in the number of small arms fire attacks left 32 people dead and six injured. At least 27 of those fatalities were inflicted during a series of night time attacks on police officers in Hadithah, Anbar province. Otherwise a total of 21 bomb attacks left 13 people dead and 39 injured.

The North
Three of the above mentioned bomb attacks involved a suicide bomber, including a double bombing in the northern town of Tal Afar (in Ninawa province) which left 20 people dead. The northern cities of Mosul and Kirkuk also saw a spate of attacks last week, including two kidnappings in Kirkuk city centre. As warned in recent reports, the Turkish military has also increased its cross-border military operations in the Qandil Mountains in pursuit of Kurdish separatist group the PKK. This regularly occurs during the month of March when winter weather conditions begin to ease. However, the majority of the region will remain unaffected by the activity and Iraqi Kurdistan is still regarded as a relatively secure place in which to do business. 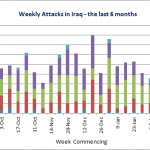 The Centre
Violence was concentrated in the central provinces last week. Baghdad itself was relatively quiet although a series of attacks against the police and jewellery shops in the north of the city and left several people dead. Meanwhile, security measures are being increased in the capital ahead of the Arab League Summit at the end of the month. The authorities announced that a 24-hour ban on carts and motorbikes would be imposed citywide from 17 March. They have not announced when the curfew will end (it will likely be subject to trends in violence and they will not want to give a specific date for terrorists to plan around) but it could last for up to two weeks. Travel around the city centre will likely become difficult as searches and safety measures are being increased around security checkpoints.

Emo and LGBT Killings
As covered in open sources, young emo and Lesbian, Gay, Bisexual and Transgender (LGBT) individuals have been threatened harassed and even killed by unknown individuals in recent weeks. It would appear that vigilantes are singling out their victims for failing to adhere to what are regarded as religious norms. The victims are reported to have been killed with the use of bricks: a painful and horrific method likely aimed at instilling fear amongst other members of the community. Official sources have not yet confirmed the death toll, with some still denying that they are taking place.