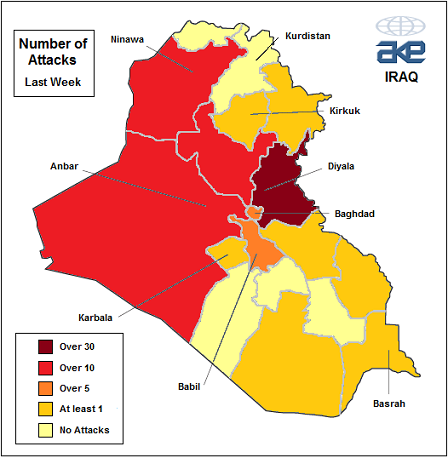 By JohnDrake on 20th June 2012 in Weekly Security Update

Levels of violence rose in Iraq last week. AKE documented more incidents than in any other seven-day period since the March 2010 elections. At least 137 people were killed and 307 injured in nationwide attacks. This is the highest figure recorded in any week since May 2010. Over the course of the week a total of 88 separate non-suicide bomb attacks left 107 people dead and 287 injured. Two additional suicide bombings left at least four people dead and nine injured. A high number of small arms fire attacks left 23 people dead and 11 injured.

Co-ordinated Attacks
A spate of bombings, shootings and mortar attacks swept much of Iraq on 13 June, hitting cities from Mosul in the north to Basrah in the south, although the majority took place in the central provinces. AKE documented at least 52 separate incidents, 24 of which took place in the ethnically and religiously mixed province of Diyala. Other hotspots included Anbar province and Baghdad. The attacks came as Shi'ah worshippers gathered to commemorate the death of Imam Musa al-Kadhim. They also came after several attacks on Shi'ah interests over the past month.

North
The northern city of Mosul saw numerous attacks last week, many of which took place on 13 June along with incidents elsewhere in the country. Kirkuk was quieter although incidents persist. The Turkish military has also increased its bombing of suspected PKK targets in the mountains of Dahuk province. This is likely in retaliation for recent clashes on Turkish territory which have left several soldiers dead. However, the majority of business interests in Iraqi Kurdistan will remain unaffected by the operations.

The Centre
Most of the violence was concentrated in the central region last week, particularly around Diyala province. It was also the most targeted region during the co-ordinated attacks on 13 June. In general the provinces with large Sunni populations were the ones most affected, while the majority of targets were related to the security forces or either the Shi’ah or Kurdish community.

Southern Incidents
The south of the country saw a slight increase in the number of attacks reported last week. Even the normally quiet province of Muthanna saw at least one incident. Basrah was hit as part of the aforementioned 13 June attacks. Otherwise, however, the majority of southern violence appeared to involve rival militia groups using intimidating tactics against one another. Foreign companies remain somewhat distant from the current trend but if conditions escalate it could prompt a considerable rethink in current operating procedures in the region.