By Gary Sandiford, Olive Group ’s Dubai based assessments manager.  Olive Group is a leading provider of security and technology solutions and has operated continuously in Iraq since 2003.

The total reported incidents in Iraq for the period 23-29 July was 161.  This is significantly higher than the previous seven day figure of 105, bringing the current weekly average for 2012 up to 106 incidents.  This high figure is due in large part to the multiple attack of 23 July (initially reported in last weeks Weekly Security Update), which primarily targeted Baghdad and the north and north central regions.  Following the 23 July attacks activity returned to what can be considered ‘normal levels’ in the provinces of  Ninawa, Kirkuk, Salah al-Din and Baghdad.  Diyala province continued to feature prominently in reporting, with further high profile attacks throughout the week.  Anbar was also subject to unusually high levels of violence this week; as insurgents focused their efforts towards the end of the week.  In contrast to the northern half of the country, areas south of Baghdad, with the exception of Diwaniyah city, reported very few violent incidents, with the south and south central regions only totaling seven between them.  For the first week in 2012 to date, no significant incidents were reported in Basra province, the main issue being a series of peaceful demonstrations to protest the persistent electricity problems in the province. 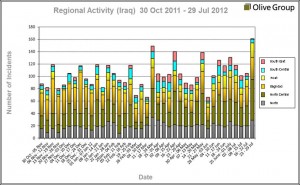