By Gary Sandiford on 8th August 2012 in Weekly Security Update

Olive Group's Iraq statistics are drawn from multiple sources, including media reporting and direct liaison with in country assets. Included within the statistics are a minority sub-set of serious incidents which may not be purely attributable to insurgent/terrorist groups, such as murder, kidnappings and organised crime activities.

The total reported incidents in Iraq for the week 30 July to 5 August 2012 was 159. This is on par with last week’s figure of 161, but still significantly above the current weekly average for 2012 of 107 . This high weekly total resulted from a high volume of small attacks, particularly in Baghdad and the north central region, rather than coordinated large scale attacks. Attacks largely focussed on small and poorly defended ISF checkpoints, suggesting that insurgents have adopted this inexpensive tactic in order to maintain a high operational tempo and keep security in the headlines during Ramadan. There were a number of more substantial incidents over the period, most notably a coordinated attack on the Hoot prison in Taji and an attack against the Counter Terrorism Directorate in Karada in central Baghdad. These attacks follow the recent Al Qaeda in Iraq (AQI) statement which threatened to target Iraq’s ‘Law and Order’ apparatus. The south central and south east regions, by contrast, have remained subdued. 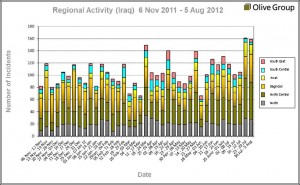