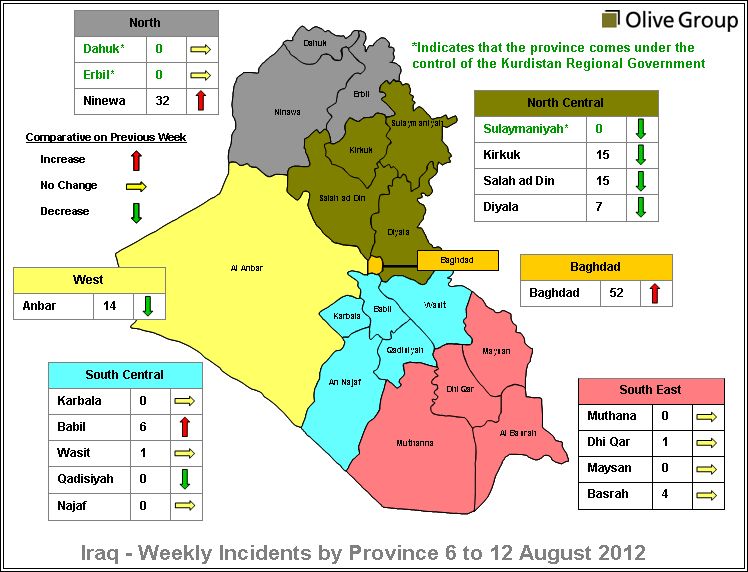 By Gary Sandiford on 15th August 2012 in Weekly Security Update

Olive Group's Iraq statistics are drawn from multiple sources, including media reporting and direct liaison with in country assets. Included within the statistics are a minority sub-set of serious incidents which may not be purely attributable to insurgent/terrorist groups, such as murder, kidnappings and organised crime activities.

The total number of reported incidents in Iraq for the period 6 – 12 August 2012 was 147. This is lower than last week’s figure of 159, but still significantly above the 2012 weekly average of 109.  The figures possibly indicate that Sunni extremists are able to maintain their high operational tempo for an extended period, though is not possible to exclusively attribute the recent elevated figures to a stronger Sunni insurgency. The Northern regions (less the KRG) and Baghdad recorded a high number of smaller incidents with a few high profile attacks also reported. The West and North Central regions both experienced slight reductions, again with fewer high profile attacks, likely due to increased security operations. Once again activity levels in the South Central and South East regions were subdued. 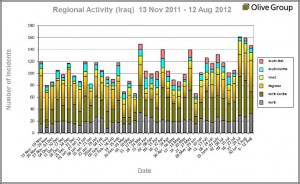