By Jared Levy on 17th August 2012 in Investment, Jared Levy

This blog post provides a preliminary look at FCA over the first seven months of 2012. Total deal numbers are broken down by sector, country of origin, and geographic distribution of commercial activity. It should be noted that the data presented here has not been subjected to the rigorous vetting and valuation process undertaken in the annual Foreign Commercial Activity in Iraq reports. As such, analysis is focused on the number of deals, as opposed to monetary value. 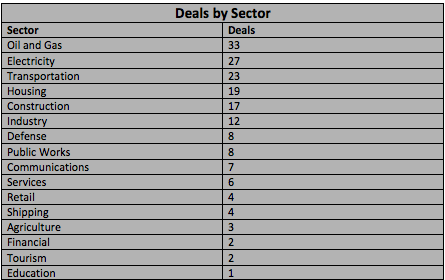 As demonstrated by the above table, MNCs operating in Iraq are heavily focused on oil and gas and electricity. This comes as no surprise. Both the central government, through the Ministry of Oil, and the Kurdistan Regional Government, through its Ministry of Natural Resources, continue to look to IOCs to develop their respective carbon resources.

Additionally, both the central government and the KRG continue to enlist foreign firms to enhance their electrical output, with numerous American, European and Asian companies constructing new power plants, as well as providing technological support to the central government’s and KRG’s Ministries of Electricity and local companies.