By Gary Sandiford on 22nd August 2012 in Weekly Security Update

The total reported incidents in Iraq for the period 13-19 August 2012 was 165. This was higher than the previous week’s figure of 147, and significantly above the 2012 weekly average of 110; possibly suggesting that Sunni extremists are capable of maintaining a high operational tempo for an extended period of time. However, as with the previous reporting period, the security picture this week across Iraq was varied, and security in some areas may in fact have been better than the overall figures suggest. In particular the increased figures in the North and South East regions contributed to the high total, however it is not clear if either of these regions witnessed a significant deterioration in security in terms of insurgent activity. With that said, it remains clear that Sunni insurgent groups have succeeded in conducting an effective Ramadan campaign - from their point of view - that has shaken confidence in the security apparatus in many areas.

On 15 and 16 August, over 20 attacks were recorded that appeared to have been part of a coordinated series of attacks across several provinces. Unconfirmed reports claimed that over 90 people were killed and many more wounded. Attack activity was significant focused on Kirkuk, the Diyala River Valley and the northern areas of Baghdad.  While these attacks were less extensive than the attacks seen on 23 July, the levels of violence over Ramadan have been amongst the highest in recent years and suggest that Sunni extremist groups are able to continue their current high operational tempo, at least in the short term. 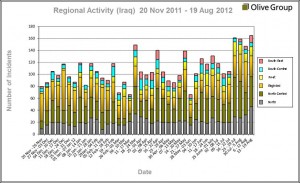