By Gary Sandiford on 3rd October 2012 in Weekly Security Update

The total number of reported incidents in Iraq for the period 24 to 30 September 2012 was 186. This is significant increase from last week’s figure of 149, and well above the 2012 weekly average of 116 incidents.  This figure is the highest for the year to date, and comes as official sources announced that September was the most violent month of 2012 so far, with a total of 365 deaths.  This week saw two complex attacks on prominent government locations in the north of the country, on 24 September the Mayoralty in Tarmiyah came under attack with small arms fire and hand-grenades, resulting in the death of a senior official and on 27 September, militants managed to gain control of Tikrit Prison following a complex attack on the facility coordinated with an uprising of inmates.  Also, on 30 September, at least 22 incidents were recorded that appeared to be part of a coordinated attack series resulting in the death of more than 32 people, and the wounding of over 100 others.  The attacks were again mainly focused on the capital Baghdad and its environs and the provinces of Ninawa, Diyala and Salah al-Din, with single likely related attacks in the provinces of Anbar andKirkuk.  Efforts to target the predominantly Shia south were also evident, with a suicide car-bomb (SVBIED) in Kut and two car-bombs (VBIEDs) that were intercepted by security forces in Diwaniyah. 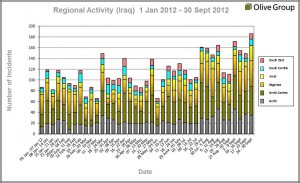