By Gary Sandiford on 31st October 2012 in Weekly Security Update

The total number of reported incidents in Iraq for the period 22 – 28 October 2012 was 115.  This figure sits just below the 2012 weekly average of 116 and is a significant reduction on last week’s figure of 144.  Despite this decrease in incidents, there were a number of high-profile mass-casualty attacks on the 26 and 27 October, likely intended to coincide with the Eid al-Adha period.  However, concerns over the potential for a series of nationwide spectacular attacks did not materialise.  The geographical spread of this week’s activity was in line with activity seen over the previous months, with the north, north-central (less the KRG) and Baghdad areas experiencing the greatest proportion of the incidents.  The southern areas of the country again witnessed low levels of violence.  The next significant date in the Iraqi calendar is the Islamic New Year in mid-November.  While the security focus remains on significant dates and events, the possibility of another series of nationwide attacks outside of specific high profile dates and events cannot be discounted. 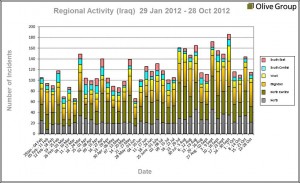