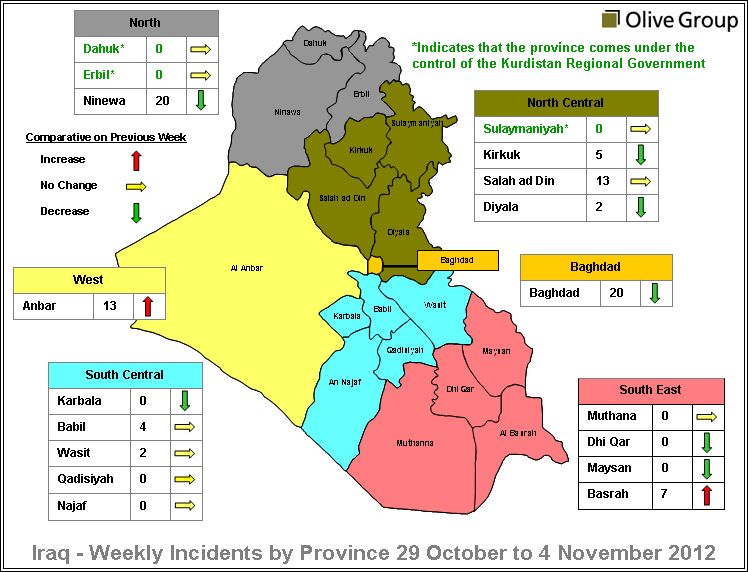 By Gary Sandiford on 7th November 2012 in Weekly Security Update

The total number of reported incidents in Iraq for the period 29 October to 4 November 2012 was 86.  This was significantly below the 2012 weekly average of 116 and a further reduction on last week’s figure of 115. This decrease in activity levels is likely due to a number of factors and cannot be taken as an emerging trend in the short term.  Activity levels throughout the summer campaign were extremely high and this decrease in activity may indicate a tactical pause in insurgent tempo.  The Eid al-Adha celebrations at the beginning of the reporting period may also have contributed to a decrease in incidents.  The increase in Iraqi Security Forces (ISF) posture and activity during the end of Eid and a reduction in media reporting was also apparent. The most pronounced activity decrease was in the Baghdad region, with a 50% decrease on last weeks figures.  The North and North Central regions also witnessed slight falls in activity.  Some regions did experience an increase in activity, with the West and South-East regions recording more incidents than the previous reporting period; the West being the only region to have activity levels above its 2012 weekly average. Iraq’s predominantly Shia southern regions continue to witness lower levels of violence compared to the rest of the country; a reflection of the long term situation in the south. 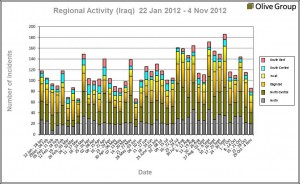