By Gary Sandiford on 14th November 2012 in Weekly Security Update

The total number of reported incidents in Iraq for the period 5 – 11 November 2012 was 123.  This is above the 2012 weekly average of 118 and an increase from last week’s low figure of 86.  This weeks figure can be considered as a return to more ‘normal’ levels of activity, following the significant low count seen last week.  Once again, the majority of attacks were targeted against ISF and government employees and explosive devices remain the favoured method of attack.  While the vast majority of attacks can be attributable to Sunni Arab insurgents, a percentage of incidents are likely attributed to Shia groupings and/or criminal activity.  The security situation remains highly regionalised across the country. Baghdadand the core Sunni provinces witnessed a general increase in reported activity, following last week’s significant low figures, the exceptions being Salah al-Din and Anbar which saw a marginal reduction in activity.  The predominantly Shia south remained relatively subdued with minor fluctuations in reporting.  The coming weeks will see two high profile occasions, the Islamic New Year (15 November) and the Shia religious holiday of Ashura (25 November), the later being an potential target for Sunni insurgents to mount high-profile, mass-casualty attacks. 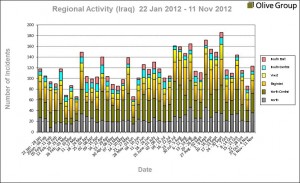