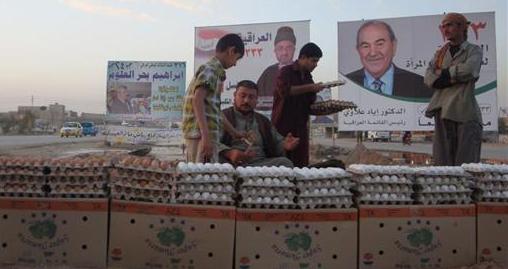 Since it lost the race to power in 2010, major opposition bloc Iraqiya has been shrinking, with defections and internal dissent. Now two leading members want to team with Iraqiya’s enemy, State of Law, for elections in 2013.

Once it was the biggest alliance in the Iraqi Parliament – larger even than the political alliance that currently runs the country. But over the past two years the Iraqiya list has shrunk; and it seems to be becoming smaller and smaller by the day.

After the 2010 elections, the Iraqiya list, which is made up of several different political parties, had won just under a quarter of the votes cast and 91 seats in the Iraqi parliament.

But these days it seems unlikely that the Iraqiya list, riven by infighting and crippled by break away parties, will ever do as well as they did back then. Even Iraqiya’s official website seems paralysed – it hasn’t been updated since the beginning of the year and pundits suggest this is because the four major leaders within Iraqiya all have different opinions and cannot publish a unified agenda.

Iraqiya says it is a secular political party but it is true that it is mostly made up of Sunni Muslims – even though its leader, Ayed Allawi is a secular Shiite Muslim. The bloc is made of four main groups, which first joined forces to compete in the 2010 elections: these are the Wifaq party (or the Iraqi National Accord) led by Ayed Allawi, the Renewal party (or Tajdeed) founded by now-fugitive politician Tariq al-Hashimi, the Iraqiyoun party headed by Osama al-Nujaifi, who’s also the speaker of Parliament and the National Movement for Development and Reform, most often known as the al-Hal, or Solution, party.