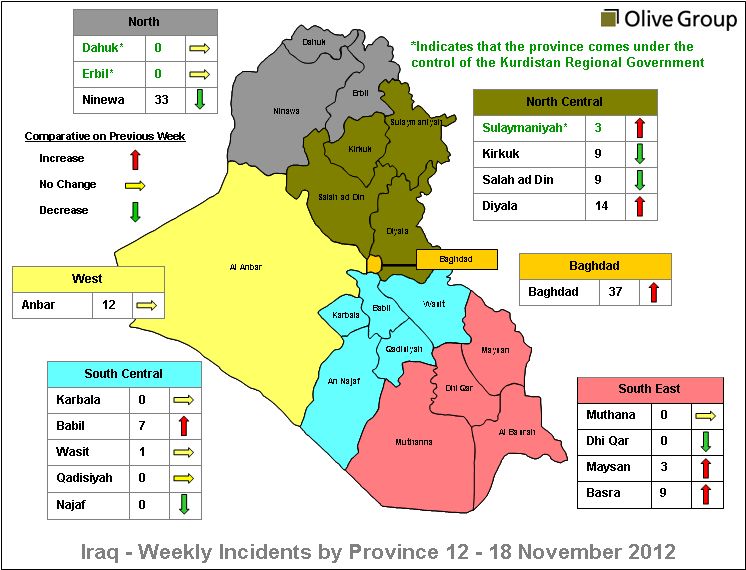 By Gary Sandiford on 20th November 2012 in Weekly Security Update

The total number of reported incidents in Iraq for the period 12-18 November 2012 was 137.  This is above the 2012 weekly average of 118 and is an increase on last week’s figure of 123.  Attacks against Iraqi Security Forces (ISF) and government employees accounted for almost half of this week’s incidents; an indication of the Sunni Arab insurgent focus to undermine the credibility of the Iraqi government and security apparatus.  There were a series of seemingly coordinated attacks on 14 November, the eve of the Islamic New Year, with eight vehicle bomb (VBIED) detonations; four in Kirkuk province and one each in Baghdad, Diyala, Babil and Wasit.  A higher improvised explosive device (IED) count was also reported, mainly targeting political and security figures in Baghdad, Ninawa, Diyala and Salah al-Din.  Whilst not reaching the magnitude of the previous coordinated attack series’ conducted by Al Qaeda in Iraq (AQI) throughout the summer months, the number and ferocity of these incidents were above the levels of routine reporting.  Several provinces have announced their security plans to protect Shia pilgrims for the forthcoming Ashura festival on 25 November, an event that has previously been the focus for Sunni insurgent attacks. 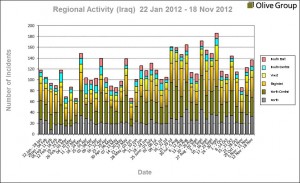