After the elevated levels of violence last week, especially high impact bombings, Iraq has this last week seen a hiatus in insurgent attacks and activity. Whilst the daily churn of violence remains omnipresent and suggest a continued strengthening of the Sunni insurgency, the country has been spared the same levels of violence seen last week, especially in Baghdad and surrounding areas, however it is expected that this continued trend of week on week off spikes in violence will continue, especially through the election season.  By close of play 26 Mar the approx. number of countrywide fatalities was at 112 with estimates of wounded at 216; bringing the total ISF and civilian fatalities this year to approx. 913.

The PKK ceasefire, Iraqi elections, events in Syria and continued frictions in the sectarian domain have dominated the week’s events.  As anticipated the PKK formally accepted a ceasefire with Turkey after the jailed PKK leader Abdullah Ocalan ordered an end to hostilities. Murat Karayilan, the PKK field commander, also accepted the decision.  The declaration from Karayilan, who is based in the remote mountains of northern Iraq from where he directs the PKK insurgency against Turkey, had been expected but was still an important sign the outlawed PKK will abide by Ocalan's orders.  Despite the positive nature of this ceasefire the implications for both Turkey and Iraq are serious.  There are still dangers of division over the terms of a peace deal or between the figures negotiating it. The process could also be complicated by the ambitions of other Kurdish groups across the border in Syria Iran and Iraq.  Prime Minister Tayyip Erdogan has taken a considerable political risk in allowing negotiations with Ocalan to unfold in such a public way. Previous efforts conducted behind closed doors over the decades to resolve the conflict have all failed yet the lure of the energy wealth in northern Iraq – at a time of increased energy dependence on Russia – may prove to be the right catalyst for these talks, however there remains a fine balance as Ocalan is reviled by many Turks for leading an insurgency that threatened to partition Turkey in its earlier days. 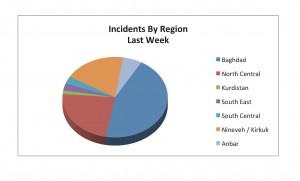 In Iraq the frictions of the Syrian conflict continue to boil over into the domestic domain.  Despite the fact that the levels of cross border incidents has subsided the after effects continue to bubble over into domestic politics.  Above all the Syrian conflict is directly undermining Iraq security as various groups posture and skirmish, taking advantage of the fluid situation.  For example, the Free Syrian Army assault of last week that resulted in the seizure of Syria’s Yaarabiyah border crossing was reportedly led by Jassim al-Shammari’s Jazeera Freedom Brigade, an Iraqi group. As his surname indicates, the leader of the group belongs to the Shammars, a Sunni Arab tribe. Even though Shammars are also present also in Syria, the tribe is concentrated in and around Mosul.  After a meeting in Mosul on March 3, the Shammar tribe urged the Iraqi government not to attack the elements of the FSA at Yaarabiyah, saying that those were people from their tribe. Given the current tensions between the protest movement and Baghdad any move by the ISF against the FSA will undoubtedly have repercussions across Iraq, especially in the Sunni dominated provinces and Baghdad.  Moreover, the Peshmerga’s recent refusal to let the Iraqi military into Sinjar on March 5 represents another clear dynamic of confrontation, especially when one considers the overt support the KRG provides to Syrian Kurds opposed to the Assad regime, which is in in direct defiance of the GoI support for Assad.

Directly linked with this is the current situation regarding the postponement of provincial elections in Anbar and Nineveh, a situation that continues to stoke debate from all sides of the sectarian divide.  The original reasons for this postponement were given as concerns surrounding the security situations in both provinces and that the elections would open the door for ‘terrorists’ to come to power.  Both arguments have ensured fierce critique and opposition from Shia and Sunni politicians alike as they lack credibility and proof.  Many see an overt and unsubtle attempt by Baghdad to marginalize the two provinces at the centre of the protest movement as part of the wider ‘muscle flexing’ actions of Baghdad as they try to wrest back control. Ironically, it has also been pointed out by politicians that the epicenter of violence these past few weeks has actually been Baghdad and that corresponding levels of violence in the two restive provinces have changed little.