With the local elections looming and little progress in the Al-Anbar / Nineveh election standoff Iraq continues to be gripped by election related violence with the first high impact attack against a political rally taking place this week. As of close of play 07 Apr the number of combined ISF and civilian fatalities was atwith estimates of wounded at 130; bringing the total number of fatalities this year to approx. 1148.

Domestic issues dominated this weeks reporting predominantly, with transnational security problems playing second fiddle to the violence that is gripping the election scene.  On 06 Apr a suicide bomber killed 22 people and wounded 60 in a crowded election campaign tent in the Iraqi city of Baquba, 65 miles NE of Baghdad.  The target of the attack was a Sunni candidate Muthanna al-Jorani who belongs to the Sunni-sanctioned Iraqiya bloc led by former Primer Minister Iyad Allawi, a secular Shiia politician.  Up until this point the majority of election related violence has taken the form of targeted bombings and shootings against individuals, with this attack being the first indiscriminate high impact attack against a political rally since this election season began.  This said in recent weeks more than 11 candidates standing in this month’s local elections have been shot dead adding further angst as to how much more violence will plague the local elections. 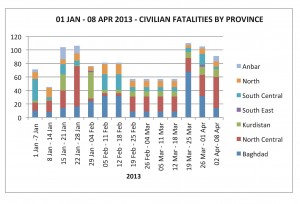 Opposition figures have accused the government of delaying the elections out of fear that anti-government candidates will sweep to victory giving anti-Sunni elements the time and space needed to wage a ferocious intimidation campaign.  Despite the tinderbox nature of the Iraqi political scene Prime Minster Maliki continues to stoke the sectarian debate suggesting publicly that he seeks first and foremost a ‘majority government’ at the expense of the Sunni community. Maliki’s electoral proposals reveal the nature of Iraq’s political divide.  He said, “The political process has entered into the recovery room. Relations between our partners was based on disruption, which necessitates early elections that will draw a new political map to revive the country.  Security and development will not be achieved unless there is political stability, which is achieved by forming a majority government…

Further afield Turkey and Syria dominated news reporting.  Despite his hardened and divisive domestic rhetoric Prime Minster Maliki said on Friday he would welcome rapprochement with Turkey softening months of hostile rhetoric fuelled by Ankara’s engagement with Iraq’s autonomous Kurdistan region.  Resource-hungry Turkey has antagonised Baghdad by courting Iraqi Kurds, who are at loggerheads with the central government over how to exploit the country’s oil reserves and share the revenues.

Ankara and the Kurdistan Regional Government (KRG) have been negotiating an energy deal ranging from exploration to export since last year.  Officials and industry sources say there have been efforts behind the scenes to reconcile Baghdad and Ankara at the insistence of the United States, which fears a Turk-Kurd energy partnership could precipitate the break-up of Iraq.  The politics here remain contentious and anything but clear, especially when one considers that prior to 21 Mar PKK ceasefire Ankara had been insistent that no energy deal would take place between Turkey and the KRG unless it was GoI sanctioned, which suggests this ‘rapprochement’ is somewhat thinly veiled.

Of concern to many, amidst a rejuvenated Sunni insurgency, was the announcement that Al Qaeda’s wing, Islamic State of Iraq, has formally declared its links with the militant al-Nusra Front, at the forefront of Syria’s rebellion, saying the two would now operate under one name.  Once weakened by years of fighting U.S. and Iraqi forces, security experts say Iraq’s al Qaeda wing has regained strength from the two-year-old uprising against President Bashar al-Assad in neighbouring Syria, which is drawing funds and Sunni Islamist fighters to its cause.  Whilst it is unlikely that this move will mean a serious migration of the Syrian conflict across the border in the short to medium term it will undoubtedly concern the Sunni tribes and GoI alike, especially when once considers how hard they fought to neutralize the ISI threat in Iraq, a threat many believe to be foreign and without credibility in the face of a determined and widely accepted legitimate Sunni insurgency.