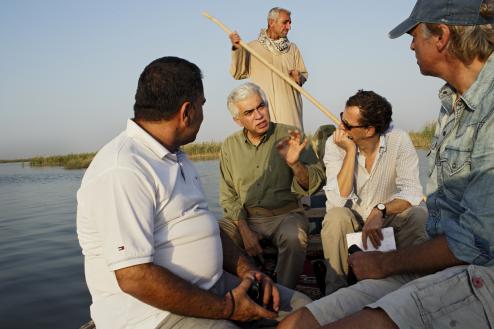 His work was not only politically challenging; it was dangerous as well. Security guards are a regular presence during his field work with his staff, and the possibility of kidnappings and assassinations loom large. Nature Iraq’s office has been raided by armed terrorists.

Despite these hurdles, the Mesopotamian marshes are starting to flourish again as a result of Alwash’s advocacy. Almost half of the original area is now flooded again, and the Sumerians have begun to reestablish their lives. In what is perhaps the most telling evidence of his success elevating the importance of the environment in Iraq, the restored marshes are slated to be established as the country’s first national park in the spring of 2013.

While continuing the restoration work, Alwash is now fighting a new threat to Iraq’s environment: an extensive chain of 23 dams upstream along the Turkey-Syria border, which if completed, would reduce the flow of water into Iraq to a mere trickle. He is organizing a flotilla tour to call global attention to the threat of water-based conflicts and turning the dams into an opportunity to revive conversations about the need to protect water resources in the broader region.