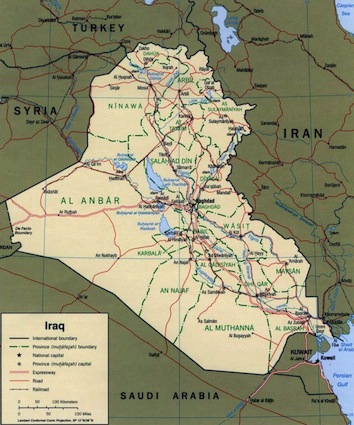 By Arabella Wickham on 30th May 2013 in Security, Weekly Security Update

Whilst Baghdad was undoubtedly the focal point of the day’s violence similar scenes were borne out across the country, including yet more attacks in the south.

In southern Iraq, two car bombs exploded in Basra, killing 13 people and injuring 40 others. In the city of Tikrit, the hometown of late Iraqi President Saddam Hussein, at least two soldiers were killed and 15 others were wounded in a car bomb that targeted an army barracks in the south of the city.In the city of Samarra, where negotiations between protesters and the government have been taking place, a car bomb killed 11 members of the Sahwa (government backed Sunni militia) movement and wounded 10 others, whilst in Mosul province, north of Baghdad, two IEDs placed on the road near a small village south of Mosul city once again targeted the convoy of Nineveh’s police chief. As a result, a first lieutenant and five members of the police chief’s protection team were injured.

The political situation in Iraq continues to exacerbate the security state. Enduring political inertia and a worsening security state has left many domestic and international figures bemused by the GoIs inability to meaningfully engage and propose basic conditions to control the spiraling violence. The demand by Iraqi Prime Minister Nouri al-Maliki “to prevent civil war from taking place at all costs" reflects to some extent the view held by many amongst the Iraqi elite that civil war will soon break out again, yet despite this there appears little momentum or desire to deal with matters.  Furthermore, notwithstanding the general attitude (across the sectarian spectrum) that Iraq must not be allowed to descend into chaos the cross party Iraqi parliament has unsurprisingly systematically failed to convene an emergency session to examine the reasons behind the deteriorating security situation in the country, or to suggest a roadmap to a peace of some sorts. Many in the domestic sphere have suggested the Iraq is in fact undergoing a complete political meltdown leaving many to wonder how the growing conflict will pan out and who will really coordinate efforts to combat growing insecurity.

These waters have been further muddied by reports of continuing disputes between multiple governmental branches and also between the head of Iraq’s executive branch, Prime Minister Nouri al-Maliki, and the head of the legislative branch, parliamentary speaker Osama al-Nujaifi, which leave a far from effective power bloc in control of the country’s welfare.

This political position has also been further aggravated by political parties and Arab tribes in Iraq’s Kirkuk province who warned that they would send the country spiraling back toward an "endless" crisis, should the 2014 elections result in the replacement of President Jalal Talabani.  Jalal Talabani’s absence — as a result of illness — is probably one of the reasons behind the exacerbation of the recent crisis and many have commented on this as Talabani has constantly served as the safety valve in the relationship between the various sectarian and political branches.

The same political parties and tribes also rejected resettling members affiliated with the Kurdistan Workers' Party (PKK) — who withdrew from Turkey — in the province, which has added complexity given the persistent tensions between the multiple ethnic groups in that part of the country.