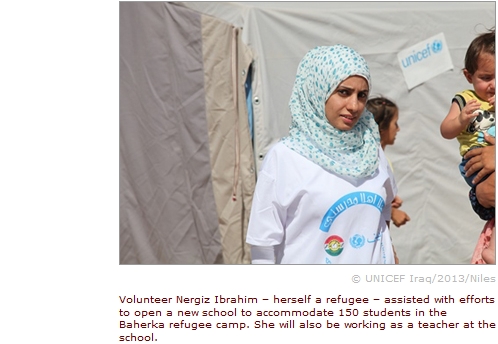 By Editor on 8th October 2013 in Iraq Education and Training News, Security

It’s been nearly two months since the government in the Kurdistan Region of Iraq reopened its borders to accept refugees fleeing conflict in the Syrian Arab Republic. Some 63,000 Syrian people have crossed the border since mid-August.

In mid-September, as the school year was about to begin, two of these refugees, at two different camps, child and adult, dreamer and encourager of dreams, talked about their lives in the camps.

Their flight was sudden. They walked to the border, bringing only the things that they could carry.

They now live in a small tent in the Kawergosk refugee camp, due west of the regional capital, Erbil.

Becoming accustomed to their new conditions has been hard, upheaval compounded by the fact that their oldest brother was killed in the conflict.

For Adla and her brothers and sisters, grieving and disoriented, time weighs heavy.

The children’s main chore is collecting water, a task that involves jerry cans and several daily trips to a pump, in baking heat. The family has trouble getting enough to eat.