The deal for the 24 aircraft, which includes the training of Iraqi pilots, was signed today in Baghdad by KAI's President and CEO, Ha Sung-yong, Defense Acquisition Program Administration's Administrator, Lee Young-geol and the ROKAF deputy chief of staff, Kim Hyung-chol as well as Iraqi Prime Minister Nouri al-Maliki.

Following the contract, KAI will be entitled to supply its follow-on support to the Iraq Air Force for over two decades, bringing the total value to more than $2 billion.

The company says that it faced strong competition from the UK, Russia and the Czech Republic, with the BAE's Hawk-128, Yakovlev's Yak-130, and Aero's L-159 respectively. 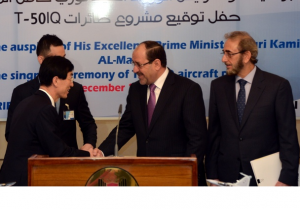