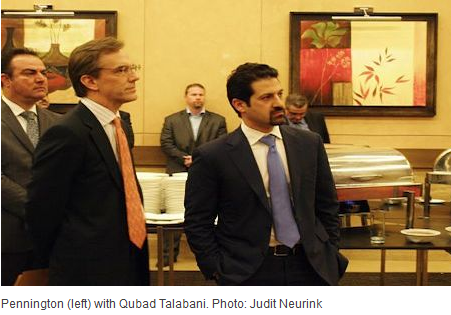 By Editor on 4th March 2014 in Iraq Industry & Trade News

By Judit Neurink. This article was originally published by Rudaw, and is re-published by Iraq Business News with their kind permission.

American Firms Line Up for Kurdistan, as Erbil Mulls US Ties

Roll in the American brands! A US delegation for franchise businesses will be visiting the Kurdistan Region of Iraq soon, to see if after Pizza Hut, Cinnabon/Carvel Ice Cream and Ace Hardware others can also find a foothold in this secure region of Iraq.

The American Consul General Joseph Pennington gave the news at a reception of the United States-Kurdistan Business Council (USKBC) at the Rotana Hotel in the Kurdistan capital of Erbil. Whether hamburger giant McDonald’s is amongst the interested visitors, he could not say. But Marriott and Hyatt Hotels are already setting up shop in Kurdistan.

The consul general was one of the speakers at the reception, organized to connect American businesses working in Iraqi Kurdistan to those officials and others who can help them move along. The USKBC is a trade-organization with some 20 members, set up two years ago to improve trade and commerce between the US and Iraqi Kurdistan.

“The story is getting out about the opportunities here,” said David Michael Tafuri of the USKBC. “The region is going to be wealthy. American products are greatly liked, and many Kurds want more of them and can now afford that.”

In contrast with the major role the Americans played in freeing the Kurds in 2003 from the regime of Saddam Hussein, on the business front they have been overtaken by Turks and Lebanese, and even by Britain, the declared partner of choice of the Kurdistan Regional Government (KRG).