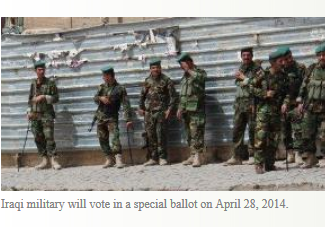 According to this soldier, the Iraqi government has allegedly played down the number of military casualties it’s had in the fight against insurgents in Anbar. Videos being posted on YouTube and other social media indicate many more are being captured and killed.

“Previously regiments in the south of the country were fairly safe on their bases,” the military source says. “Then al-Maliki decided to bring them to Anbar and it’s led to many deaths. This has increased ill will towards the government.”

“The government has forced the Iraqi military into a battle it cannot win,” says Yassin al-Rubaie, a former member of the Iraqi army’s Seventh Division, which is currently deployed in Anbar. “We don’t have any experience fighting a guerrilla war on the streets and we don’t know the area at all. The militias fighting us know the area very well, they’re better coordinated than the army and they have had this kind of combat experience before,” he says.

Al-Rubaie says he left the military after being trapped in a gun battle on the outskirts of Fallujah city. He says they called their headquarters for reinforcements but no one even answered his call; he and his comrades got into a gun battle and one of them died before they were able to escape the scene. “After that I decided to leave the army,” al-Rubaie says. “And I am not going to vote in the elections either.”