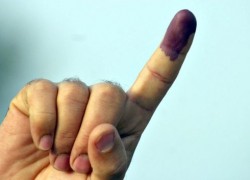 Millions of Iraqis went to cast their votes today as the country went into a state of lockdown for elections. Polling began at 7am and will close at 6pm.

Previous elections in Iraq have been marred by considerable violence, while 50 were killed on Monday as Iraq's armed forces cast their votes.

Aside from the fact that Iraqis will be braving a grim security situation to vote, the elections themselves will be a considerable feat.

A new electronic voting system is in place and has apparently led to delays in some areas. According to the BBC almost 22 million people are registered to vote and will be served by nearly 50,000 polling stations.

Analysts are highly divided over the outcome, although most expect Maliki will gain the most votes, possibly by a narrow margin. Some 9000 candidates are competing for 328 seats in parliament.