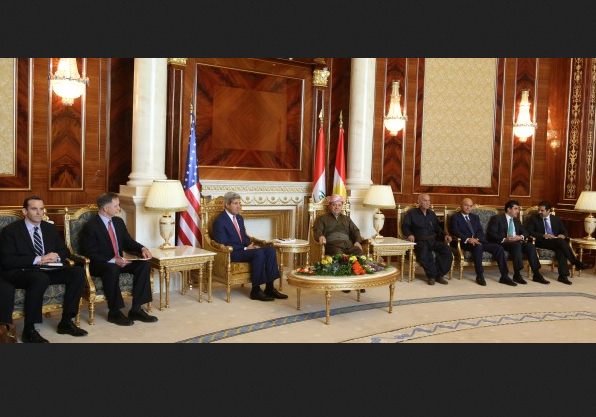 During the meeting the President and Secretary Kerry discussed the latest political and security developments in Iraq following the latest Islamic State of Iraq and al-Sham (ISIS) advances in Mosul and other areas in Iraq. Secretary John Kerry focused on the urgency for Iraqis to rid Iraq of ISIS and other terrorists.

The Secretary of State made reference to the fact that the Kurdistan Region has achieved remarkable progress in the past ten years and urged other Iraqis to look up to Kurdistan for what it has achieved.

John Kerry added that the Obama administration is closely following the events in Iraq and is concerned about the spread and strengthening of terrorism in Iraq. He also expressed his country's support for a new inclusive government in Baghdad which would represent all of the components of Iraqi society.

For his part, President Barzani reiterated his gratitude to the government and people of the United States for their sacrifices and continuous support for Iraq. During the meeting the President outlined the various stages in the political process of the past decade in Iraq and noted that [Kurdistan's] allies have failed to implement the Constitution and subsequent agreements.

The President added that the Kurdistan Region has demonstrated great flexibility and has always been ready to address the issues, but these issues have recently been worsened and that [Iraq] has collectively failed to resolve them.

President Barzani said, "We believe that Baghdad is trying to marginalize us, as was the case with the previous regime, but the people of Kurdistan have made great sacrifices for their freedom and they would never accept this subjugation."