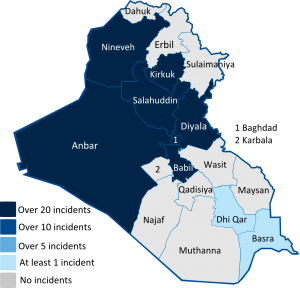 As ISIS consolidates its positions and increases its territorial control across the north and west of Iraq, its leader Abu Bakr al-Baghdadi announced the creation of an ‘Islamic Caliphate’ on 29 June in areas overrun by insurgents. While largely symbolic, this announcement represents another blow to the central government, which has proven incapable of retaking control of towns captured by militants. Hopes for a rapid government formation were shattered on 01 July after Allawi’s Sunni bloc and Kurdish parties walked out of a parliamentary session designed to discuss possible leadership candidates. As long as political forces remain divided, coordinated efforts on the ground between the ISF, Kurdish security forces and local tribal fighters against ISIS are unlikely to materialise and break the current stalemate. Casualty figures released this week showed that violence killed more than 2,400 people in June, the majority them civilians, making it the highest death toll in seven years. The crossing of Kurdish forces into disputed territories, the consolidation of ISIS bases and the resurgence of nationalist sentiments in the South have added more substance to claims that Iraq might eventually disintegrate. PM Maliki’s rivals, among them influential cleric Muqtada al-Sadr, have continued to support a change of leadership and proposed the formation of an emergency government, which the ruling State of Law coalition dismissed immediately. The ouster of Maliki, whose perceived exclusionary policies have gradually antagonised a majority of Iraqis, is expected to remain a condition posed by his rivals to engage in productive leadership negotiations over the next weeks. Despite a continued interruption or lack of reporting across the territories gained by ISIS, it is assessed that levels of violence will continue to rise in the north and west of Iraq.

The situation remains essentially stagnant in the North, with the main frontline still located between Samarra and Tikrit. ISF operations attempted to regain control of Tikrit, captured by insurgents on 12 June, with a coordinated assault involving airstrikes and ground troops launched on 28 June. As of 30 June, fighting was still ongoing in the city’s southern outskirts, with an additional 100 vehicles and units of Shia militias making their way to the front from Samarra. The distinct political landscape of Tikrit, which hosts former Baathist elements, means that a recapture of the town by the ISF will be resisted by a majority of locals, making the task particularly difficult. In Samarra, mortar shells failed to hit the al-Askari shrine, one of the holiest Shia sites, the bombing of which precipitated an all-out sectarian conflict in 2006. ISIS fighters have taken advantage of the security vacuum left by the national army to reinforce their positions in the north, most notably in Tal Afar, and engage in occasional clashes with Kurdish Peshmerga forces present on the outer borders of disputed areas in southern Kirkuk and eastern Diyala. However, the posture of Kurdish forces is expected to remain defensive, and attempts at driving ISIS out of Iraqi territories are unlikely in the near term. International efforts aimed at fostering a military alliance between the ISF and the Kurds are unlikely to succeed as long as political concessions regarding oil exports and the regional budget have not been secured, and the situation is therefore expected to remain stagnant across the region. 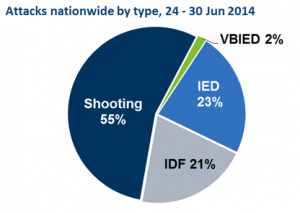 Levels of violence across central provinces remained elevated, with deadly incidents recorded in Baghdad and a revitalised insurgency in northern Anbar. The corridor between Fallujah and al Qaim continued to be the subject of ISIS attacks this week, with major clashes reported in neighbourhoods of Ramadi as well as further north in the vicinity of Haditha. On 26 June, fighting between ISF units and ISIS fighters occurred in Barwana, near the strategic Haditha Dam, prompting fears that a capture of the infrastructure by militants could be imminent. Insurgents took and opened the Fallujah Dam earlier this year, which caused destructive flooding in surrounding areas. Meanwhile, though levels of violence in the capital were aligned with previous levels, Baghdad avoided the sequences of VBIEDs for the second consecutive week. This lull appears to be due to the reinforcement of the security belt around the capital, owing to deployments of Shia volunteers from the south. Despite this change of pattern, mass-casualty assaults continued to hit civilian areas; an IED attack on 26 June killed and injured more than 50 people. This trend is expected to be repeated in the next reporting period, with security measures effectively countering ISIS intent to strike Baghdad with car bombs.

The month of Ramadan, which started on 29 June, is expected to witness important gatherings across Shia-dominated provinces. While this period has routinely attracted an increased number of militant attacks against Shia targets in the past, it is doubtful ISIS has the intent or the capability to launch significant attacks south of Babil. The ongoing focus of ISIS on Iraq’s northern territories is indeed likely to confine militant incursions in the South to the mixed province of Babil, where radical cells have had a longstanding presence. The resurgence of Shia-nationalist sentiments and solidarity against the Sunni militant threat have resulted in a sharp decrease in tribal fighting in the South East, with no major incident reported this week. This was further reflected in the deployment of civilian volunteers to northern frontlines. The significant uptick in attacks recorded in Babil illustrates the strategy followed by ISIS this week, who seemingly seek to distract the ISF from its northern positions by attacking areas just south of Baghdad. 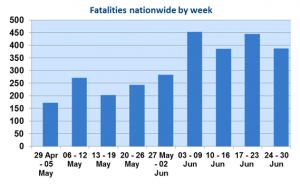