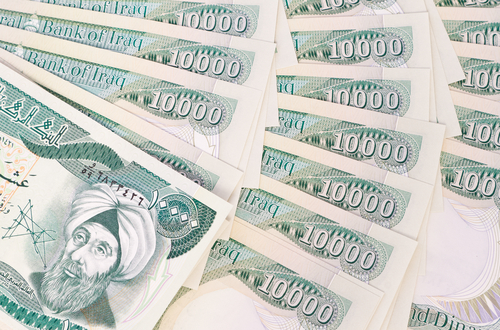 Following the insurgency by ISIS/ISIL, and the declaration of a 'caliphate' to be known as the Islamic State (IS), we have seen an increase in enquiries to Iraq Business News regarding the future of the country's currency, the Iraqi dinar (IQD).

These enquiries typically come from people who have been persuaded to speculate on the currency by buying Iraqi banknotes, often in the hope of a stratospheric returns.

Many of these people, who like to think of themselves as ‘investors’ rather than speculators, genuinely expect to make a thousand-fold return on their money, and therefore are not concerned about the very wide spread between the current buy and sell prices, which can make this a very lucrative trade for currency dealers.

For those who promote the idea that the Iraqi dinar will revalue (or 'RV', as they term it) to 1,000 times its current price, the increase in terrorist activity has several implications.

On one hand, it makes it more difficult to argue that Iraq is on the road to recovery, making the 'Big RV' a more difficult sell. But on the other hand, it provides a useful explanation for why a revaluation, which they have been claiming was imminent for several years, will not occur any time soon. As a result, they can save face and extend the life of their business model. Meanwhile, others have argued that revaluing its currency would provide the Iraqi state with the strength it needs to fight the insurgents.  Read more ...

7 Responses to Poll: ISIS and the Dinar Traders