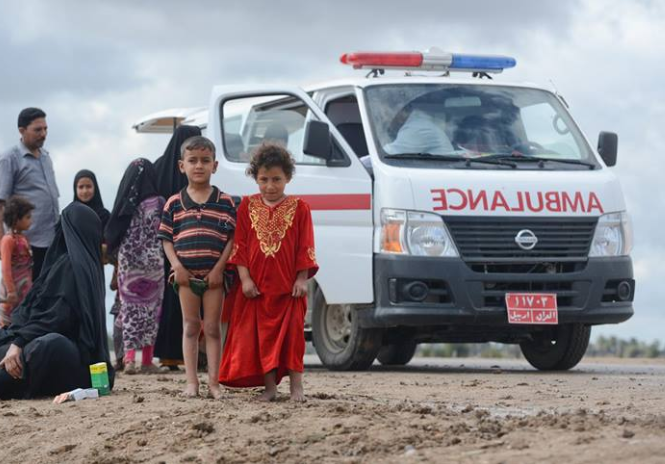 A British-run charity has launched an emergency appeal to help the many hundreds of thousands of people forced from their homes by the Islamic State (IS) fighters in Iraq.

The AMAR International Charitable Foundation is one of the only organisations offering help to families as they flee the fighting that has engulfed much of the North of Iraq.

Many have suffered terribly after being caught in the crossfire and shelling as the IS surged through their towns and cities. Adults and children alike have been both physically and emotionally scarred.

Thousands more have had to leave their homeland simply because they are not Sunni Muslims. Shia Muslims, non-Salafists, Christians and Yazidis were threatened with death. The non-Muslims were ordered to convert to Islam or pay taxes simply to stay alive.

AMAR has helped millions of Iraqis over the last 23 years, and now runs medical and educational programmes across Iraq. Their highly skilled teams of local doctors and other medical professionals are now being deployed to help the refugees.

The organisation’s Chairman is Baroness Nicholson, who commented:

“As we all know, the most terrible atrocities are now being carried out in Iraq. It is a desperate situation for hundreds of thousands of men, women, and children. People just like us, with lives and futures.

“However, while much of the western world continues to focus on the poor people of Gaza, little is being done for so many more people in Iraq. The Disasters Emergency Appeal (DEC) here in the UK has already raised £8 million for Gaza. There is no DEC appeal for Iraq.”

AMAR has been helping the Iraqi people since 1991, and they are now perfectly placed to help the refugees, but need an urgent injection of funds to make this happen.

“We have just 12 staff in London and 1700 staff and volunteers in Iraq. They are all well-qualified local people who use local resources to carry out their life-saving work. They are wonderful professionals, but we desperately need money to help the huge numbers of people involved,” continued Baroness Nicholson.

Dr Ali Muthanna, AMAR’s Regional Director, explained that refugees were now arriving to all corners of the country, from Basra in the South to Erbil in the North.

“There are up to one hundred thousand Internally Displaced Persons (IDPs) in Baghdad alone. Tens of thousands more are living on the road between Karbala and Najaf, and more again, including many Christians, have fled south. Currently many are relying on the generosity of local people, but this will not last forever,” explained Dr Ali.

“AMAR wants to help as many people as possible. There are so many heartbreaking cases. Our own staff have been in tears listening to their harrowing tales,” he added.

Typical of the cases the doctors are seeing, is the Um Haider family. During the fighting in Tal Afar a shell struck their home. One daughter was killed; another, Israa, lost both her legs; a third girl, Omaima, had both her legs broken; and a fourth daughter was badly injured by shrapnel.

They received emergency treatment at the time, but now AMAR doctors are looking after them as they begin the long road to recovery.

“The family suffered most terribly,” said Dr Ali. “They lost one girl and the rest have been horribly injured. We are working to ensure they get the best treatment possible and, just as important, that they get continuing expert care.”

He added: “The Um Haider’s are just one family out of many who have been deeply affected by the violence in the North. We are working non-stop to help as many as we can but we now need outside help to fund us.”

Uniquely, the charity is also helping the vulnerable INSIDE the IS-controlled areas. Medical staff running the hospitals and clinics in the locations taken over by the Islamic State are desperate for medicines and other vital supplies. Anaesthesia drugs are in especially short supply, and there are harrowing reports that pregnant women have been forced to have Caesarean section operations without them.

Following lengthy negotiations with IS officials, the doctors on both sides have now obtained agreements to allow AMAR staff to send the medicine that will help those who have been unable to escape.

You can read more about AMAR’s work at www.amarlondon.org or on the lastest on the situation in Iraq on Facebook at https://www.facebook.com/pages/AMAR-International-Charitable-Foundation/151692864894817

Or go straight to our Virgin Giving site at: