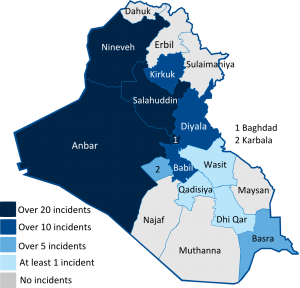 Iraq’s casualty figures released by the UN on 01 September showed that at least 1,420 people were killed in August alone, in a slight decrease compared to last month.  Meanwhile, Prime Minister-designate Haider al-Abadi continued to hold meetings with Iraqi parliamentary leaders, in order to facilitate negotiations towards the formation of a new government. Forming a cabinet before the constitutional deadline, set on 11 September, will be challenging unless Abadi manages to broker deals with the Sunni and Kurdish constituencies, which address their grievances against Iraq’s Shia-dominated regime. The Sunni bloc reportedly withdrew from these talks on 31 August, which could be used as a tactic to extract more concessions from Abadi’s coalition. While outgoing PM Nouri al-Maliki’s untenable position eventually led him to endorse Abadi as his successor, his unannounced visit to the recently-freed town of Amerli suggests that Maliki will seek to retain a role in the new political landscape. Although the incumbent PM urged Abadi to refuse any “pre-conditions” to government formation, there seems to be a consensus around the necessity to bridge Iraq’s various communities, through more inclusive policies appealing to a broader base. As such, an agreement aimed at easing the resentment of Sunni populations and delaying Kurdish ambitions for statehood is probable. Expectations are that Abadi will push for an agreement before the constitutional deadline in a bid to boost his own legitimacy, increasing further the chances of considerable concessions to powerful groups. The security situation across Iraq remained aligned with previous patterns of violence, with shelling, executions and suicide attacks accounting for the majority of the 389 fatalities recorded over the reporting period. The swift international response in support of the Kurds allowed Peshmerga forces, allied with ISF elements, to retake territories which had fallen to IS over the past weeks. The main fighting areas are expected to remain concentrated in western Nineveh and eastern Salahuddin, where most of the joint Kurdish and ISF efforts seem to be allocated.

Kurdish forces continued to regain ground in the North, by launching coordinated offensives against IS-controlled territories of Nineveh and Salahuddin. A combined force of ISF, Peshmerga and Shia militias, supported by US airstrikes, managed to break the siege of Amerli in Salahuddin, while efforts are ongoing to retake the nearby town of Sulaiman Beg, at the hands of militants since June. The successful rescue of Amerli, albeit with strong US support, marks the first time that Iraqi forces have won a significant clash against IS. On 28 August, Kurdish forces claimed the capture of the town of Zumar, west of the Mosul Dam, and cleared villages on the outskirts of the Ain Zala oil field. Following the re-capture of the strategic dam, the control of surrounding territories is an indication that Iraqi and Peshmerga forces are consolidating their positions in Nineveh. While US air support and military equipment sent to the Kurds have undoubtedly broken IS’s momentum in the North, large swaths of territories remain firmly under insurgent control, including the main cities of Mosul, Tikrit and Baiji. Attempts at recapturing Hawija in Kirkuk and Jalawla in Diyala from IS remain unsuccessful, despite offensives launched on IS positions. Dislodging militants from urban areas remains dubious without the negotiation of tribal alliances. 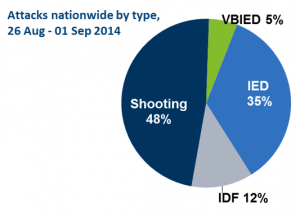 Despite the continued occurrence of car bomb attacks in the capital, their number remained aligned with their post-IS insurgency averages. Four VBIEDs hit the New Baghdad, Rashied and Bayaa districts, causing dozens of fatalities and hundreds of civilian injuries. Ongoing fighting in territories north of the capital perpetuated the status quo in Baghdad, where active militant cells established in the city accounted for the majority of violent incidents. Outside Baghdad, militant efforts remained focused on Anbar, with a number of skirmishes resulting in scores of fatalities. On 28 August, clashes between ISF and IS elements near al-Qaim, western Anbar, killed six militants. The majority of deadly incidents continued to be reported in the corridor encompassing Ramadi, Haditha and Fallujah, where Iraqi forces continue to rely on airstrikes and alliances formed with local tribal leaders to contain the advance of insurgents. As areas north of Baghdad continue to absorb most of the IS and ISF resources, a significant breakthrough is unlikely from either side and the situation is expected to remain stagnant.

As military efforts remain focused on the North, southern provinces have continued to avoid sophisticated militant incursions. General levels of violence remained consistent with previous averages, with Babil concentrating the majority of deadly incidents. Attacks against Baghdad’s southern belt have witnessed a lull since July, and Babil governorate has avoided VBIED attacks for over six weeks. This pattern demonstrates that IS’s current priorities remain set on consolidating and expanding their positions in the North, and this ongoing strategy is expected to define the South’s security landscape for the next weeks. Meanwhile, the majority of violent incidents reported in the South-East continued to stem from familial and tribal disputes, with an unusual series of IEDs reported in Karbala. While the unity of Shia lists in the face of a common radical Sunni threat has so far largely contained intra-Shia violence, competition for power and government posts retains the potential to inflame tensions in the longer term. It is assessed that the South-East does not face any immediate threat from IS operations, and levels of violence should remain stable over the next weeks. 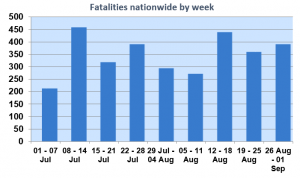