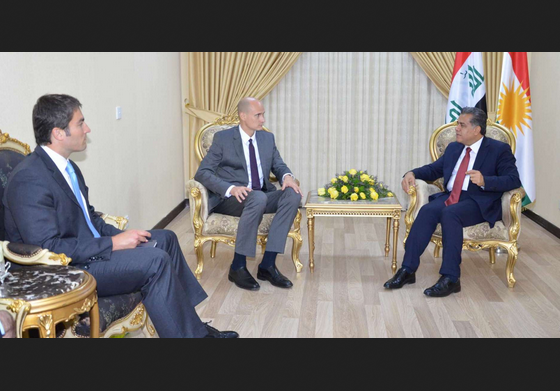 By Editor on 16th September 2014 in Iraq Industry & Trade News

Mr Miroslav Dosek, Head of Middle East and North Africa section of the World Economic Forum (WEF), visited the KRG Department of Foreign Relations to discuss economic developments in Kurdistan as well as the current security and humanitarian situation.

Mr Dosek said, “The achievements and the success of the Kurdistan Region are very much lauded in the international business and political community.”

Mr Dosek added, “The role of KRG in the last few months in terms of sheltering hundreds of thousands of members of religious minorities and protecting civilians against the atrocities of the terrorists is very admirable.”

Minister Falah Mustafa expressed his government’s commitment to achieve further economic and political development despite the humanitarian, security and financial challenges at hand.

Emphasising the necessity of continued military support for Kurdistan, Minister Mustafa stated, “With the help of our friends in the international community, the Kurdish Peshmerga forces have proven that Islamic State terrorists are not an invincible force; they are being defeated by the Peshmerga forces on the battlefields on a daily basis.”

Mr Dosek informed Minister Mustafa of the World Economic Forum’s session on unlocking resources for regional development, which will be held in Istanbul, Turkey from 28-29 September 2014. He said, “We would be pleased to have a KRG representative attending the WEF meeting in Istanbul in order to discuss the humanitarian needs of the Kurdistan Region.”

Mr Dosek also expressed the importance of further increasing the WEF’s ties with the KRG, encouraging regular participation of the KRG leadership in the future activities and events.