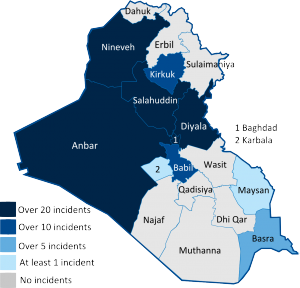 ISIS’s military strategy continued to defy airstrikes conducted by the US and their allies, with militants gaining ground in Anbar and launching successful assaults on towns to the north of Baghdad. The security situation continued to complement stagnating political dynamics in Baghdad, with disagreements opposing moderates and conservative elements judging concessions to the Sunnis have already gone far enough. This lack of unity is likely to remain problematic in the government’s fight against insurgents. Sunni tribes continue to harbour deep suspicions about the government’s agenda, preventing the formation of a unified front against ISIS and limiting cross-sectarian alliances to local arrangements. The coercive methods used by ISIS in areas under their control, such as public executions, as a means to instil fear within the populations, have thus far succeeded in preventing local rebellions. Meanwhile, the effective cooperation between Peshmerga units and Iraqi soldiers continued to reflect improved relations between Erbil and Baghdad, based on Abadi’s recent decision to release the salaries of KRG employees and the promise to seek permanent solutions to crises. As Iraq’s new Prime Minister continues to negotiate policies aimed at reversing the country’s security situation, the scale of recent ISIS operations conducted in southern Salahuddin and northern Anbar have confirmed their change of focus to areas closer to the capital.

The most significant clashes between pro-government forces and ISIS were witnessed in the southern part of Salahuddin province, bringing the fighting closer to the capital. The town of Dhululiya, north of Baghdad, was the scene of fierce clashes between a complex nexus of tribal elements allied with ISF forces, and ISIS militants.  Insurgents launched a first counter-attack on the town, before pro-government elements managed to repel ISIS in some of its districts. As Dhululiya remains contested, militants also launched an assault on the town of Balad near the northern edges of Baghdad on 04 October, prompting local Sunnis to form an alliance with Shia volunteers to contain the attack. As ISIS increase their efforts on Baghdad’s northern belt, militants continued to adopt a defensive posture in areas close to the northern frontline. Kurdish forces are assessed to have regained half of the territories they lost in ISIS’s swift offensive in August. Four villages were captured in Salahuddin’s Tuz district, while several villages were seized to the north and east of Baqubah in Diyala. Whilst ISIS maintains an important number of troops in and around Mosul, militant resources are expected to remain heavily directed towards central targets, where the group can more easily distract the ISF by attacking Baghdad’s belts.

ISIS militants made further territorial gains in Anbar, while Baghdad witnessed levels of violence in line with previous averages. Islamic fighters seized the town of Kubaisa on 04 October, two days after a complex assault on Hit allowed militants to seize the city located west of Ramadi. The capture of Kubaisa allows Sunni insurgents to consolidate their positions near Haditha and the military base of Ain al-Asad, which the ISF uses to protect the Haditha dam. The dam remains a focal point of ISIS, for the considerable damage its destruction would inflict to Iraq’s power system, and efforts are expected to intensify in order to progress further west. Radical cells established in the capital continued to be responsible for most of the violence witnessed in Baghdad, though incident levels remained aligned with previous averages. The most significant attack occurred in the al-Jadida district, when a car bomb exploded in a popular market, killed 12 civilians and injured dozens. Protections around Baghdad’s western belt have reportedly been reinforced with the sending of additional troops to the town of Ameriyah, near Fallujah, which links Anbar to the capital. ISIS’s main efforts are likely to remain focused on securing Hit and its surrounding areas, ensuring that large-scale assaults will be predominantly attempted in Anbar.

As previously assessed, the strategy of diversion followed by ISIS translated in VBIED attacks against southern targets. Arguably incentivised by a period of Shia religious celebrations, militants detonated car bombs in Babil, Karbala and Basra on 30 September. Whilst these attacks failed to cause any fatalities within the population, they nonetheless demonstrate ISIS’s intent to disrupt pro-government counter-offensives in the North. Pre-established patterns of violence should ensure that south-eastern governorates avoid sophisticated militant incursions over the next reporting period, and that most of the violence remain confined to criminal and tribal disputes. 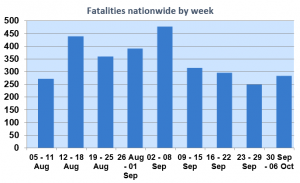 Transparency in Iraq’s Extractive Industry at a Crossroads
Video: Iraq wants Sunni Factions to Fight IS