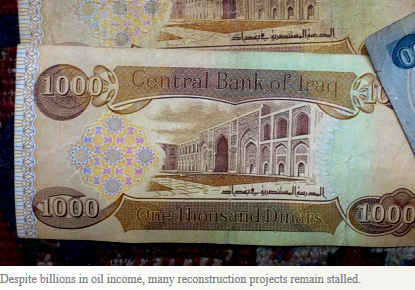 By Editor on 11th October 2014 in Construction & Engineering In Iraq

A Committee For Reconstruction – The Cure For Iraq’s Economic Woes?

Thanks to security problems, political bickering and a lack of vision, there are thousands of development and construction projects on hold in Iraq. Now local economists and investors are calling for the formation of an independent Committee for Reconstruction staffed by experts, to save the country.

Iraq has been suffering from unclear economic planning for over a decade now. As a result, it is only smaller, private projects that ever seem to be completed. Large, strategic, government-funded projects are either never started or never finished.

Additionally corruption, security issues and political infighting have all led to a delay in the Iraqi Parliament approving the annual federal budget. In turn this has led to delays in all of the projects that the Iraqi government would normally be funding. According to the Iraqi government figures, the 2014 budget would be coming in at around US$140 billion.

Which is why many investors, economists and business people in Iraq have come up with a new idea to kick start the Iraqi economy. Many are saying they want to see the formation of an independent Committee for Reconstruction, a body which would be tasked with creating and implementing development projects.

Part of the reason they are enthusiastic about this idea is that it has been used successfully in Iraq before. In the 1950s, when Iraq was ruled by a monarchy established by British colonisers, there was a similar committee. The Iraqi Development Board completed major projects around the country, some of which still benefit the population today.

One example is the Thar Thar reservoir which both stores water and diverts flooding from Baghdad.